Wendy photographed me at the London College of Communication in November 2015 and she was such a joy to work with that it was almost inevitable that we would have another shoot; it felt that we had unfinished business. Why is she a joy? Well, she is so enthusiastic and up for anything. She smiles a lot and that is infectious. Because we had shot in the studio previously, she wanted this shoot in the open air and ideally on the beach and, as the previous shoot had eventually ended with some nude shots, we decided on the beach at Southwick in case this happened again and happen it did. 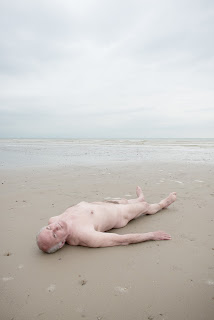 The light was perfect, dull and cloudy but the mood was the opposite, bright and sunny. We met at Brighton Station and we drove to the beach and chatted and laughed on the way and laughed and chatted on the sand and we tried some different shots including some on my hands and knees and it was one of those we both liked. 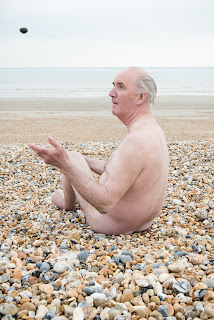 I feel very honoured to have worked with Wendy. When I first saw her work, it was very varied in style and content. She takes a great interest in her subjects and I felt that it would be fun to be with her and it was. However, there was also a tinge of sadness as the final shoot in two weeks' time was now on the horizon. Sad also because of the many happy shoots on this beach before with Julia Horbaschk, Sheryl Tait, Mike South, Itziar Olaberria, Charlie Clift, Eleanor Hones, Holly Oliver and Poulomi Basu.