This was our third shoot and this was Lucy's favourite image from it. As with the previous shoots with Lucy, there were so many good pictures that came out of it. This is because Lucy is like a little bird collecting bits and pieces to make her nest. For example, she met me at the station and, on the way to her studio, she took a piece of blossom from a roadside tree and this appeared in one shot about an hour or so later but then she looks around her studio and sees a bird which appears on my shoulder a few seconds later and then 'click' and it becomes a contestant for a place in "Over the Hill". 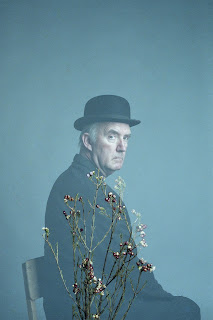 On this day, Lucy was also playing host to a final year film student who was making a film about analogue photographers and she was there for the first part of the shoot in Lucy's studio. After she left, we went to a large room down the hall and tried out some other shots of which this was one. Lucy didn't say why she liked this photograph so much. For me, it is the composition. The fact that the main figure is blurred and out of focus makes it look quite painterly and the position of the mirror meddles with the perspective. Is the mirror on the wall or the floor? It has wit and it provokes. It asks questions. It was interesting the way in which Lucy spoke to the student and asked her questions. I think that Lucy is a teacher and if, in another life, I had taken up photography, her work would have been my inspiration. 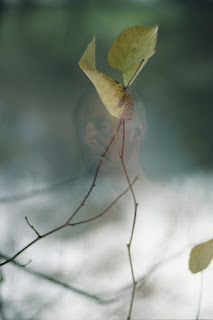 We had longer than usual on the shoot as I was not going straight back to London but on to Blackpool for a shoot with Julie Mullins and then on to Sheffield to meet Al Brydon and Jacqui Booth. It was nice not being in a rush. We had time to talk. Time to think. Time for a song. Time to finish.

Time for all good things to come to an end.