Sometimes, I have a shoot where I have no idea at all how the final images turn out; all I see is the camera and I know that it is pointing at me but I have no conception of what the image will look like when it is developed. This is what happened on this shoot. And it was no fault of Stephanie that I didn't know. Indeed, I told her after I first saw her work on the University of Brighton website that I loved her 'blurred' portraits and then we met to discuss what she was going to do so I had no excuse apart from.......Parkinson's Disease. It wasn't that my illness affected my memory - well, not directly anyhow. It was that it had got so much worse towards the end of 2013 in that I was experiencing longer ''off'' periods i.e. periods when the drugs didn't work. As a consequence, my usable time was getting shorter - my twelve hour day was being reduced to four hours and yet I was still trying desperately to fit in the same activities I had been enjoying so much since I got the bloody illness. Something had to give and, in this case, it was remembering information such as that which Stephanie and I had agreed to do on the shoot. All that was in my mind on the day of shoot was that, when I had met Stephanie before the shoot, we connected, and that I would not have contacted her if I hadn't thought she was an excellent photographer. What more did I need?


So, there you are. On 19th March 2014, when she came to the house, we had a great shoot but I had no inkling of how the pictures would turn out. It took a few months for Stephanie to produce the results. On 4th July, I received them from Stephanie by email and I almost melted on the spot. I loved them. They spoke to me so eloquently, so deeply. They were a record of that day in March certainly but they were so much more. This shot particularly represents the affect the disease has on me as it is the fact that my brain no longer produces enough Dopamine which causes the symptoms. That said, I have always maintained that I am not documenting my illness as such but rather I am documenting myself at a time when I happen to be ill. Of course, the two are intertwined and, as I say, the illness had been been causing me more problems recently. So, the fact is that the photographs, particularly this one, were very relevant. But apart from that aspect, look at this photograph. It is so beautiful. I love the starkness of the image as a a whole but then within it are the curiously gentle folds and shadows on my white shirt. The face is almost blank but not quite - the movement of the head as the shot was taken has left two lines spurting from my left eye, like tears. Obviously, Stephanie did not necessarily set out to create those two lines but they were created as so often these happy accidents are by her applying that innate skill and confidence of the artist which enables a beautiful image to be created and to encompass this serendipity, like Francis Bacon painting figures and a line of paint being swept accidentally across the canvas and thereby adding to the image rather than ruining it. It is rather appropriate that I cite Bacon in this connection as, to my mind,  the figure in the photograph is distinctly 'Baconesque'. 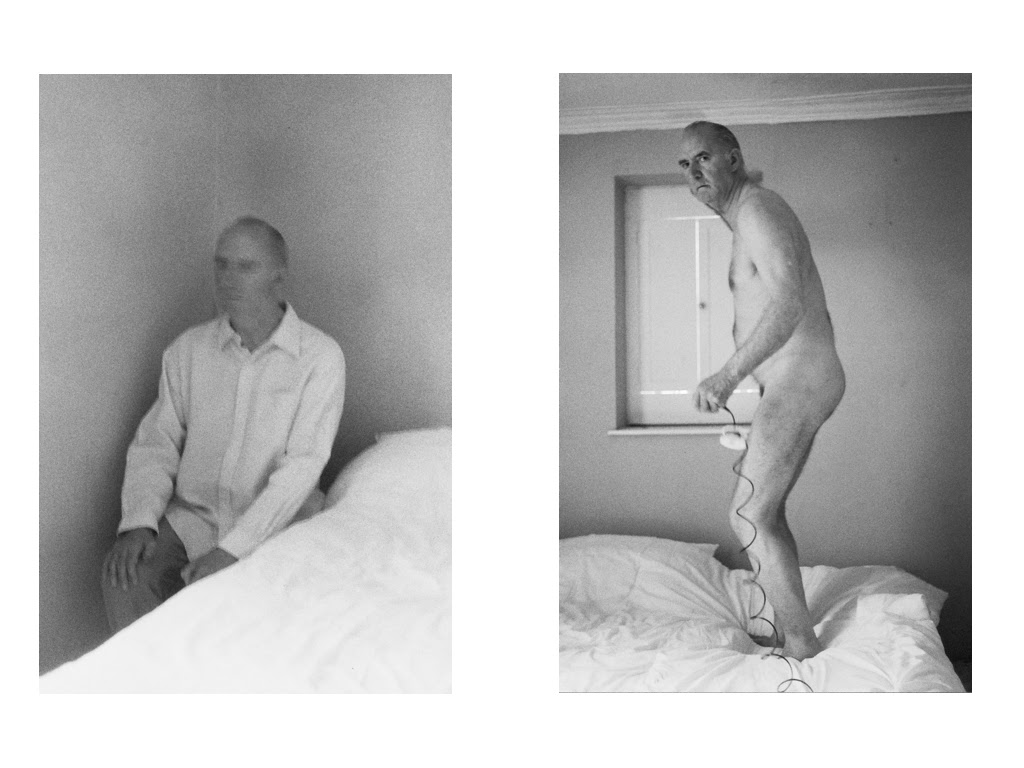 And, of course, I am now feeling much better after my recent surgery so this picture, although very much an accurate representation of me at that time, is now very much of the past, albeit the recent past. It reminds me of a book that my mother gave me when I was twelve years old. It was "The Pictorial History of the Wild West". She knew that I loved Westerns and I was fascinated by the real stories and the photographs of the real cowboys. But some of the photographs were taken on cameras which could not cope with any movement by the subject and so some of the pictures in the book were distorted in the same way as this. I was very healthy when I was given the book but that healthiness has now gone so Stephanie's photograph has an even greater meaning as a consequence.

I am so pleased with this, so honoured to have been photographed by Stephanie and so happy to be alive.