YOU'RE SAFE WITH ME by Sarah Lee

Just about every week, I come across a great photograph in The Guardian and I ask myself, "Who is this by?" and, almost without exception, I find that it has been taken by Sarah Lee. What is it about Sarah's work that makes it so enjoyable? I think it is the softness of the image; the love and care that has been invested in the taking and developing of the picture; the connection between photographer and subject; the knowledge and experience that she has built up over her successful career. And yet, after she had photographed me, she looked again at the other photographs on this blog and said that she felt a fraud in the face of all the breathtaking imagery that I had commissioned. I have encountered similar reactions before by some photographers but Sarah could not be more wrong and I told her so but, even then, although she thanked me for my reassuring comments, she commented that she felt I was prone to being kind in general.  Now, I would like to discuss this briefly lest any other photographers feel the same. I am often accused of being gushing when I comment on my photographs and that may well be correct...to a point. However, I feel that no self respecting artist will ever be fully satisfied by what he or she has done and often will be highly self critical which is as it should be and it is not for me to dwell on the negative and certainly it would not be fair or appropriate for me to analyse photographs critically as I am not a photographer myself. Of course, I have opinions about photographic work but I am a very positive person and I am fortunate to be so and, therefore, my tendency is to look for the positives in anyone's work. But that is not to say that my opinions and critiques are questionable. Indeed, I do feel I have been very honest in my assessment of the images in the Project. So when I say that Sarah is a GREAT photographer, not only do I mean it but also it is true.


It must also be mentioned that I wrote to Sarah as long ago as 2009 asking if she would like to photograph me because I loved her work so much; I did not receive a reply but apparently that was because the email went to her office computer and disappeared under a welter of emails and goodness knows what. Four years later, Luke Dodd, the curator of my exhibition at The Guardian Gallery proposed that I be photographed by one of the Guardian's photographers and suggested, to my sheer and utter delight, that Sarah took this on. And take it on she did. I travelled by tube to Mornington Crescent and it was not long before I was shaking the hand of a large rotund woman with greasy hair and rotten teeth - wrong flat. I found the right flat and was met on the threshold by very attractive open faced woman with eyes of the brightest blue set off by short blond hair, twists of which curled prettily in front of each ear. We shook hands and Sarah introduced me to her charming little dog, Frieda, (whom, I was informed, has a penchant for men) and then offered me Apple and Cinnamon tea and we chatted a bit before Sarah set up a black backdrop against which she took some headshots using both her large heavy digital camera, the make of which I forget (if I ever knew it), and a recently acquired and much loved Leica digital camera which Sarah quite rightly said emitted a far more pleasant whirring sound as the shutter clicked at the defining moment. We decided to go outside as well and do some location shots which we did on the stairwell of her building, through a pub window and, finally, along the canal at Camden Lock. It was these last shots that Sarah enthused about, particularly those with my eyes shut which felt weird as, by then, the effects of my medication were beginning to wear off. But, dear reader, please look at the images above and below and tell me that they are not superb. You cannot because they are superb in every way. The gentle sweep of the sun over my face brings me forward into the viewer's consciousness prompting various questions. Who is this man? Where is he? What is he thinking? Anything or nothing? What are the blotches of light behind? Who cares? We do because, by virtue of her innate skill, Sarah has ensured that we do, that we engage with the person we see before us. 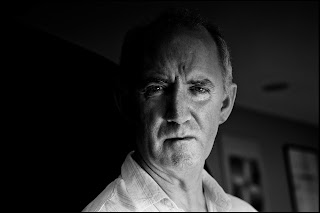 Afterwards, we returned to her flat over looking the rooftops of Camden and had tea and biscuits whilst Frieda looked on longingly, not at me but at the jammy dodgers balancing on the arm of the sofa on which I was sitting - so near and yet so far. We talked (that is, Sarah and I talked - Frieda was otherwise engaged) about photography, Phillips Roth's Nemesis and the various versions of songs with the title "Over the Hill" by John Martin, Loudon Wainwright and Annie McGarrigle until it was time for me to leave. I tickled Freda's ears one last time, kissed Sarah goodbye and threw myself off the balcony and floated down to the street below using a white handkerchief as a parachute. That last bit was a lie - I took the lift - but, as I walked away, I noticed a spring in my step. I had just been photographed by Sarah Lee.


I received the photographs from Sarah the next day and, whilst thanking her, asked her if she remembered whether I had proposed a title for the photograph. I thought I had but she could not recall my doing so but did suggest one of her own - ''You're safe with me''. And I was too.