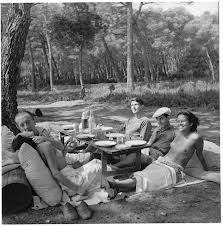 
Years ago, I saw this photograph in a Sunday Supplement and I was transfixed. Some people are born uptight and out of sight, some people achieve that state of being and some have it thrust upon them. I have no idea where mine came from but I was uptight and out of sight for many years until Jane got her teeth into me and slowly I unwound myself. Underneath, I was fine. I never took any drugs but I loved getting high on life, love, nature and film and so, when I read about the effect of drugs, I felt somehow that I had been there and that I knew what it was all about. Of course, I knew nothing but I had something coursing through my veins making my toes curl. So, when I saw this photograph, I knew it was about the inner me. It is so beautiful, so natural, so free. I fell in love with it and I fell in love with Lee Miller.


Fast forward a few years to the computer on my desk at work. I used it only for legal work but eventually, we bought a computer to have at home and, tentatively, I began to use it. One day, I typed "Lee Miller" into the search engine and my life changed forever. That sounds a bit melodramatic but it is true, in fact. I found that her house, Farley Farm, in East Sussex, was open to the public and so I booked a tour and one lovely warm summer's day, Jane and I went down to Muddles Green and, with several other people, we met Lee's son, Antony Penrose who gave a short illustrated talk about his mother in the hall of the house. Then he and his daughter, Ami, showed us around the house. The tour started off in the kitchen and we were shown a tile made by Picasso which was fixed to the wall behind the Aga and I remember thinking "Who cleans that with Jif?" Farley Farm remains a house, a home rather than a museum, even though it is packed full of wonderful paintings by Roland Penrose, Miro, Max Ernst and Picasso and photographs of and by Lee Miller and Man Ray. At the end of the tour, I felt my eyes were filled with light. We all reconvened in the hall and we were served with tea and biscuits by Antony's former nanny, Patsy, and I introduced myself to Tony.


I said how much I loved the photograph of The Picnic and that I thought I had seen another similar photograph taken on the same day a few years ago. Tony said that I had, in The Observer and, flashing that warm smile of his, he asked "Would you like to see some more?" I think it was Ami who scurried off and returned with a large book which she opened to reveal the original strip of negatives and the contact sheet of the piece of film taken that same day in 1937. It was like finding the Holy Grail. 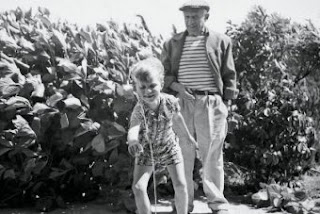 The following summer, I visited the house again with my niece, Olivia, and Tony recognising me, chatted in that easy, friendly, wide-eyed way of his. I see something of me in him in that we both believe in true love and we are fascinated by unconventional life styles. We met again, soon after I had been diagnosed with Parkinson's, when he came to Charterhouse School and gave another wonderful illustrated lecture about his mother's life and work. At dinner afterwards he talked to Jane about her work and I mentioned my project. Of course, we talked about his mother too and I realised that he was as much of a fan as I was. 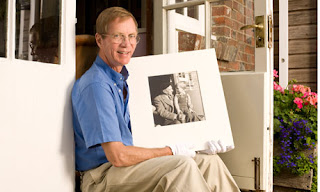 
So how did this change my life? Well, I have always liked taking photographs but I was never really any good at it. However, once I was introduced to Lee Miller and her work, I developed a passion for Photography; not the craft or act of taking photographs but the meaning of Photography. I found that, if I walked into an exhibition of mixed media, I would head for the photographic images. If I visited the National Portrait Gallery, I would be drawn to the photographs rather than the paintings.
As I am a bear of little brain, it is not easy to intellectualise what it is about photography that grabs me. The nearest I get is that I am fascinated by the fact that a photograph is real in that it depicts what we actually see but at the same time it is unreal because nothing is ever frozen in time. This love of photography caused me to answer the advertisement to model for Graeme Montgomery which was the start of my project - the rest is history.


So I fell in love with Lee Miller but what is it about her and her work that I adore so much? Well, I never met her but I feel I know what she was like because her photographs are infused with her personality. There is humour (see the brilliant picture of the two models wearing masks); there is romance (see the image "A Portrait of Space"); there is courage (see any of her war photographs); there is compassion (in spite of her anger at what the Nazis did - look at the beautiful face of the young german girl whom, with her parents, has committed suicide); there is the unashamed display of her body (see Man Ray's gorgeous pictures of her). And there is deep depression brought on by the horrors which she witnessed during the liberation of Europe and which precipitated her decision to pack up all her photographic equipment and stow it away in her attic together with thousands of negatives some of which are only now being developed and made public for the first time.


In 2005, I was diagnosed with Parkinson's Disease. In 2006, I retired as a solicitor. In 2007, my project began and 240 photographers, four exhibitions, a piece on the Culture Show and articles in various magazines later, Jane and I were invited to exhibit jointly at Farley Farm itself. Can you begin to understand what that meant to me? I was so bloody honoured. I have no idea how cameras work. I could never be a professional photographer but I can say that I have worked with some of the very best photographers around - do you know how good that is? And, in doing so, I have collaborated with wonderful artists and we have used humour and romance and courage and compassion and nudity to produce some stunning images.


And so, on 2nd June 2013, Jane and I will open our joint exhibition "Over the Hill and Don't Look Back'' at Farley Farm - Lennon, Dylan, Miller, Penrose, Jane Andrews and me! I know, I know, I am not in their league but what acts to follow.

"Alright boys, this is it...over the hill"