Well, here you are - my choice from some beautiful photographs taken by Brian. I had thought that the obvious choice would be "Over the Hill" which is printed below. It might be easy to assume that this was a posed expression but if you read my earlier post, you would know that when Brian gave me the piece of paper with "Over the Hill" on it, and asked me to think what it meant to me, I just broke down which was a real surprise. But it was the sudden emotion of the moment which, looking back, was when I realised that this was the one phrase that day that connected me to Brian and both of us to the project. However, I feel that, in some ways, it is not for me to put this particular picture into the project as it is almost too personal although it is simply a most wonderful photograph. Brian has created the moment and captured it perfectly but it is the composition and the tone and the collaboration that come to the fore and prove themselves. But those words apply equally to all the others and certainly to "Confront and Survive''.


The title comes from an incredible documentary called ''Five Broken Cameras'' which is the story of a Palestinian who films his village's ongoing battles with the Israelis concerning a number of issues. At one point, his wife berates him as he is about to be arrested once again and she yells at him demanding to know why he keeps doing it. He replies ''It helps me confront life and survive''. And this what my project, my films and my writing do. They help me to confront the life I have been given and to survive. 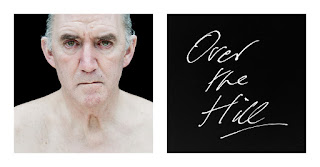 It has been an absolute privilege and an honour to be photographed by all these people and to get to know them and I cannot speak too highly of Brian in this context. A hugely talented photographer, a gifted and sensitive artist and a thoughtful and warm hearted person to boot.