It was strange to revisit the awards this year. Why? Well, first of all, I was without Jane who had wanted to come but wasn't able to because she had to be at home that day and secondly, this year I had entered the Awards myself with my self-portrait which was highly commended by the judges.

The Peak Family have very generously set up these awards in the memory of the late Mervyn Peake who suffered from Parkinson's Disease and it is a marvellous way to help not only those who suffer from the condition but also to bring awareness of it to the notice of the general public. But more than that, it gives specifically to the sufferers an opportunity to express themselves artistically and to fight against the illness in that way.
I arrived at the Merchant Taylor's Hall in the City at about 12.15pm and had just about enough time to see all the photographs and paintings and to read some of the poetry which had either won an award or had been highly commended. I met Paul Jackson-Clark of Parkinson's UK and Fabian Peake, the artist, and we chatted for a few minutes until we were called through to the dining hall which was very impressive and l made my way to my table. There I met Sylvia Hogg, who had won the Painting Award. She was a very jolly person and we both had a giggle when the waitress put milk in her apple juice -  no, I have no idea why she did it either. I was sitting next to Paul and chatted to him some more as well to Fabian who was sitting on the other side of Paul. Fabian told me that he had used photography quite a lot in his recent work which is being exhibited in Camden. He said that it was still possible to view the work as the exhibition had been extended by the gallery and so I said that I would try to get to see it.
I filmed the proceedings and also took still photographs of Fabian, Clare Chater (Head of Events at Parkinson's UK), Joanne Harris the writer (who is a great supporter of the awards and who presented the certificates) and many of the winners and other participants. I met Peter Jones who had beaten me to the Photography Award but I have to say that there was no argument. His photograph, "Summer Days", of a young boy on a beach with a passing dog was exceptionally good and well worthy of first prize. He was also a very nice chap and very Welsh as his name suggests. Amanda Crane won the poetry prize and her poem was read beautifully by Joanne Harris.
Gradually the dining hall emptied and I took the opportunity of interviewing Sebastian Peake and Clare Chater for my film and then took my leave and caught the train back home to Brighton where I  immediately set about editing the film of the day. When I showed it to my daughter, I burst into tears. It was very moving seeing these people whom had worked so hard to produce their work and also to hear Joanne, Sebastian and Clare speak so positively about the awards. So, all in all a lovely, slightly strange day. 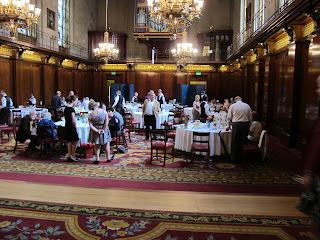 For some reason, I am having difficulty uploading the film into this post so I refer you to You Tube, the link to which is http://youtu.be/II1-wGIebnA.