I was recommended to contact Muir by Pal Hansen and, even though by then I had been photographed by the likes of Rankin, Jillian Edelstein and Steve Bloom, I really felt that with Pal and Muir, I was now firmly entrenched in the world of expert photographers. I should emphasise that that is not in any way meant to denigrate those other esteemed photographers but rather to honour both Pal and Muir.

Muir agreed immediately to photographing me but it was some months before we met at the door of his studio in Hoxton Square from whence he took me to a local cafe for a drink and a chat. We got on very well and it wasn't hard to understand how he and Pal were friends; they are both gentle people with a certain spark of something inside and they clearly have a keen interest, a curiosity, in their fellow man. Well, we agreed to meet soon and so we did and again it was a very easy-going, relaxed experience. People have said that a number of the images in my project are quite theatrical and maybe they are but I like the quieter, more subdued photographs just as much and they tell a story too. Most of the photographs taken by Muir that day are very composed and well, just easy.

I received the photos from Muir when, at the same time, he wrote explaining that he had just returned from sunny California to the somewhat less pleasant climes of East London - it was in the middle of weeks of rain. I pointed out to him that perhaps not all was bad because I had heard from a member of my family who lives on a street in Bethnal Green which, according to the local police, has 82 working prostitutes plying their trade, that one can get a blow job for five quid! I suggested that that must be cheaper than the going rate in California. I hasten to add that I have not savoured the felatic delights on offer in either country and I am sure the same goes for Muir but I digress. 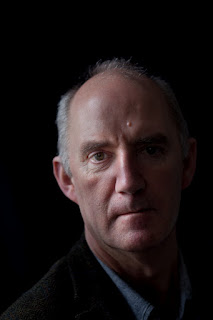 Of course, the pictures received from Muir were superb and it was a difficult choice to make. Muir favoured this one with the glasses because he liked the deadpan expression and so I plumped for his choice in the end. I don't know quite what it is about Muir's work that I like but it is as if he has stroked the image softly with a special brush and he has done so with love and care which makes you feel "mmmm" and want to curl up in a corner with a cup of tea and "To the River" by Olivia Laing and let the taste of the tea and the glorious poetry of Laing's prose wash over you. He has a magic touch.