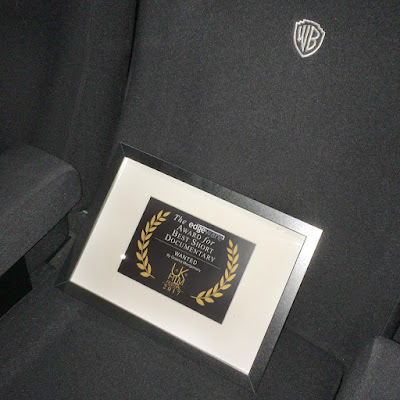 "WANTED", the film made by Graeme Montgomery of the last last shoot of "Over the Hill", won the award for Best Short Documentary at the UK Film Festival Awards last night!
Before the evening of the first public showing of the film on 23rd November, only a few people had seen it and, indeed, I had not watched it for quite some time. It was going to be interesting to be witness to the audience reaction to it and particularly to watch it almost a year and a half after I had brought the project to a close.

I found my way to the Close-up Film Centre in Sclater Street, East London which is an arthouse cinema and resource centre for for film culture and history and an excellent library of rare and classic films. I had never been there before but it had some delicious looking books and DVDs on the shelves. Murray Woodfield, the Director of the Festival, came up and said hello and we chatted briefly about the schedule for the evening and he asked kindly about my condition. I was worried that I wouldn't recognise Graeme when he arrived but he acknowledged me immediately and we chatted with each other and with Murray before we were ushered through to the small cinema to view the various films on the programme - ours was the last to be shown. We took our seats in the middle of the front row and I explained to Graeme that these were always our preferred seats me I took my children to the cinema in the old days. Just before Murray kicked the evening off with a short introduction, Graeme introduced me to Leon Haxby who composed the excellent music in the film and who was there with his father.

The standard of all the films was excellent. One of my favourites was "After Life" a documentary from New Zealand by Nick Mayow and Prisca Bouchet which examined the routine and camaraderie and the undoubted sensitivity of the staff of an Auckland funeral parlour. "Ecstasy", a beautifully acted short feature,was enthusiastically received by the audience who repeated their ecstatic applause when the director Kitty Frobenius was introduced by Murray at the end. The Penultimate film was an incredibly sad, yet inspiring, documentary "Limit of Freedom" by Joe Gist and Aidan Joseph, told the story of a group of Nepalese street children and the efforts made to wean them off a life of glue sniffing and other abuses.

Having seen such wonderful work beforehand, I wondered how it would stand up in comparison. Well, I needn't have worried. Graeme has produced a brilliant coda to the project which he unwittingly started ten years ago and with it he has provided me with the silk ribbon to tie around the box marked "Over the Hill: the completed project". I can now, finally, place that box on a shelf but every so often I shall take it down, blow away the dust, untie the bow and dip into it and remind myself of the times I spent with 425 men and women who contributed to a strange, exhilarating and surprising journey.


As the film ended, there was warm applause and Graeme placed an appreciative hand on my shoulder. I could have cried but I didn't. I showed a lot of emotion in the film but one thing which surprised both Graeme and myself was the amount of laughter from the audience certainly in the first few minutes. There were some amusing parts particularly when I described my obsession first with Gumtree then Flickr and then Twitter in my relentless search for photographers. Graeme thought that it was mostly embarrassed laughter and maybe he was right because I don't think the audience were expecting what they got in the end i.e. the story of my project. Graeme's presence is very strong but then I know how much he is responsible for. The silhouetted sequence at the beginning stands out as does the pause on Number One, his first shot in the project, which then heralds the parade of over 400 images which follow. He really did set the template for all the shoots which followed his, by being genuinely interested in the person he was photographing and engendering in me the same interest and curiosity in the photographers and how they went about their work.

We had a drink afterwards and chatted some more. He is such a nice man. And he is very good at what he does. We walked towards Shoreditch and then hugged goodbye.  A guy was busking at the top of the stairs in the train station. I asked him to play something for me - he didn't have a Beatles song but he had a blues number by the Stones and sung that instead, accompanied by his base drum and slide guitar. I wanted to dance but I didn't. I gave him something and carried on up the stairs. I fell asleep on the train to Brighton and, when I got home, I told my wife what I have told you.

Unfortunately, I couldn't make it to the Awards ceremony last night but Graeme did and he told me the good news.

Graeme, thank you. You are a prince.