I woke at 6am in the guest bedroom of the flat owned by my best friend, John, who I met at University in the early 1970s and with whom I still share an inane sense of humour. He works, as I used to, as a solicitor but enjoys it marginally more than I did  - certainly he is more suited, intellectually, to the job. John walked with me as far as Queens Square and I carried on to The Watershed where I had been invited to take part in "Feeling Images", a symposium on Photography's relationship with Illness, Mental Health and Wellbeing co-ordinated by the wonderful Shawn Sobers of University of West of England (UWE) in Bristol. 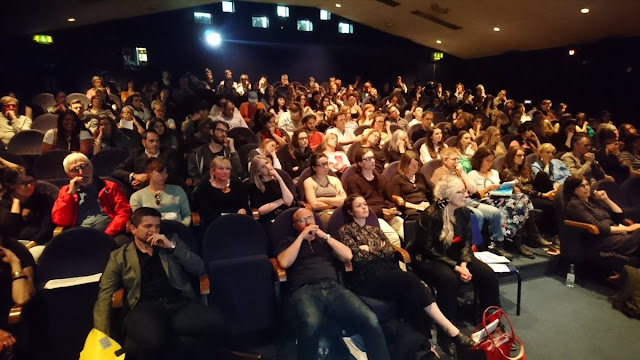 I walked up the stairs and felt good vibes wash over me - the atmosphere of the building combined with the anticipation of meeting Shawn was a good mix. As it was, I was met by Nick Bright from UWE first with a smiling face and a warm handshake. Within a few minutes, I was chatting easily to Ruth Davey whom I had not met before and who told me that she had been asked to to speak about "Look Again", her Mindfulness and Therapeutic photographic practice. She introduced me, in turn, to Jimmy Edmonds, a documentary filmmaker and the three of us chatted until Shawn entered, dressed all in black although, to be completely accurate, his suit was a dark charcoal grey but his shirt and shoes were black with his hair tucked neatly away under a cap. His infectious smile lit up the room over which he sprayed his magic dust and made everyone feel welcome - it was ever thus - no wonder he is spoken of so fondly.

I joined the queue into the auditorium and there was the lovely Jessa Fairbrother. We last met in Bristol in November last year when I came away from her studio totally inspired by our time together. She sat one seat away from me and and that allowed Jayne Taylor to sit between us as I introduced her to Jessa.

The event was a sell-out and the seats filled up quickly and the buzz of conversation died away as Shawn stood up and said a few words of welcome before asking Ruth Davey to take the stage to begin her interactive opening assisted by a cup of coffee and a glass of water. She spoke confidently and almost inevitably during the still sequence, all was quiet until a jingle on a mobile phone started but somehow its melody seemed to fit the mood. 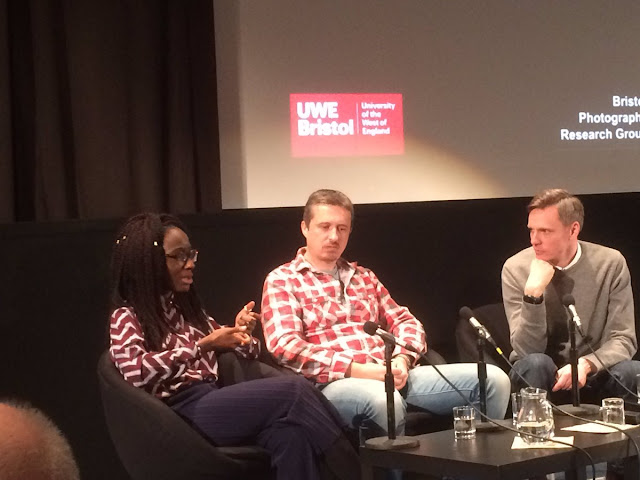 Next up was an intriguing pairing, Patrick Graham and Heather Agyepong. Patrick went first and told of his fascinating visual essay on his father "The Things You Left Behind" He looked calm and comfortable in his belief that he had found closure on dealing with his father's abandonment of his family but I did wonder if that would always be the case bearing in mind that he had taken the concertina book of images with him when he visited his father in Portugal but could not actually bring himself to show it to him. He was followed by Heather whose project "Too Many Blackamoors" was inspired by her astonishment on hearing that the history of black people in Britain  dated back some 500 years and yet Heather has very recently been treated like shit because of the colour of her skin. However, she raised a huge laugh she recounted how her father had failed to recognise his own daughter in her self portraits on display at the opening of her exhibition but when he was told, he was so proud  - in stark contrast to Patrick Graham's father's attitude to his children. Nick Bright interviewed them both afterwards and posed some astute questions followed by more from members of the audience. The warm applause at the end of the Q&A session felt like an enormous group hug. 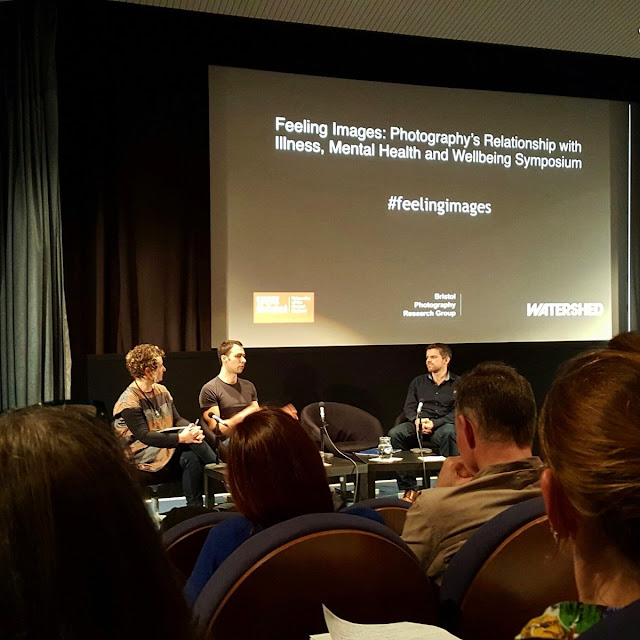 Ruth Davey then returned to speak enthusiastically about her love of nature and the need to take time and I was really impressed by her assured delivery obviously honed in the workshops she holds regularly -in fact, another one is coming soon to Bristol. Ruth was followed by Tim Shaw, a strapping young man with an open and engaging manner. Tim founded the 'Hospital Rooms' project with Niamh White and, again the questions posed by Angus Fraser and the audience were incisive and the answers given were revealing. 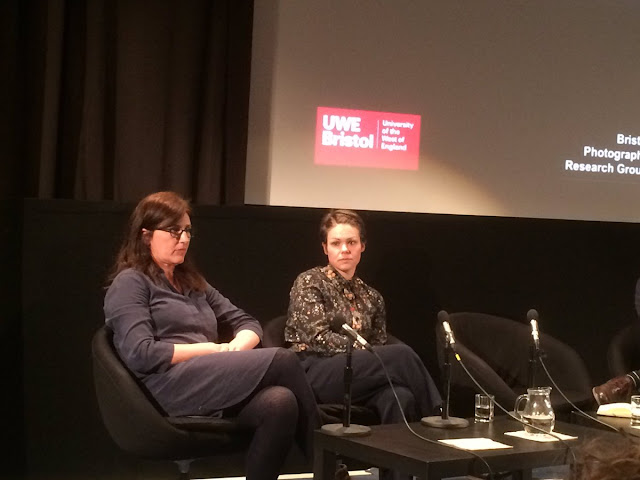 I nipped off quickly at the lunch break to find my friend Lin with whom I had also studied Law at university and who lives in Bristol. We quickly caught up on our respective news before we took our places in the front row ready for my own session but before that we and the rest of the audience had the privilege of witnessing the searing honesty of the next two speakers, Clare Hewitt and Sian Davey. First, Clare spoke spoke emotionally of her two projects ''Eugenie'' and ''Kamera'' the second of which is ongoing. Her photographs were absolutely beautiful (no surprise there as I knew of the quality of her work from my own shoots with her over recent times) but it was her earnest desire to connect with her subjects which I found so moving. She is completely dedicated to what she does. She looks so delicate and yet her resolve and courage have enabled her to befriend and earn the trust of the blind Eugenie and the prisoner Chuck who sits on Death Row in the States for a crime that Clare has never sought to investigate. Reeling from this, we were then put through the wringer by Sian who spoke eloquently of her empty childhood and her subsequent depression following a crazy time in her youth and then showed us an incredible array of photographs of her daughters with the back view of Alice clambering on a gate contrasting with the bold and brazen gaze of her stepdaughter Martha looking directly into Sian's camera.  Another group hug followed the Q&A session as the audience demonstrated the level of love and support in the room by their applause.

Then it was my turn. Gulp. I shall leave others to comment on my presentation but what I would say is that it was lovely to look across at the smiling faces of Amanda Harman, Kathy Foote and Ameena Rojee and to be reminded of Shawn Sobers' relief that he did not have to undress on the nudist beach when he came to film me in Brighton for my project "Over the Hill". I felt proud to be on the same stage as the four of them and to look out into the audience and see Clare Hewitt, Jayne Taylor and Jocelyn Allen - all members of my family of 425 photographers who had shot me over a nine year period. 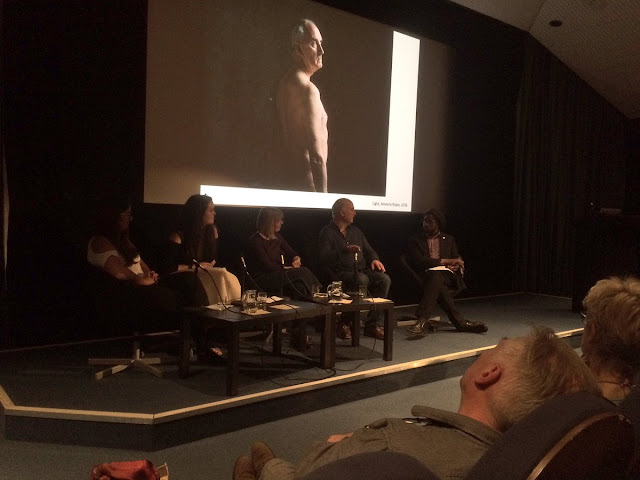 There was a coffee break and then the final pairing Rosy Martin and Tamany Baker. Rosy was delightful; she huffed and puffed at the podium and gradually revealed her unique self portraits of her parents whom she loved so much and who lived in a house full of memory. Tamany's description of her work was, on her own admission, more intellectual but no less entertaining for all that especially the story of her son's discovery in the freezer of the seemingly endless production line of their cat's presents of the mutilated bodies of a variety of wild birds and animals. 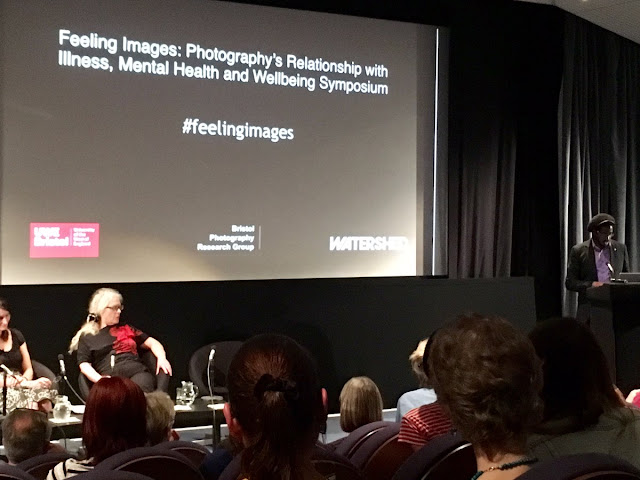 At the end, I felt pleasantly tired but invigorated by the day and the wonderful collection of artists which Shawn had chosen so wisely to entertain and inform us so brilliantly on Photography's relationship with illness, mental health and well being. I sat the balcony of my friend John's flat overlooking the waterfront sipping a gin and tonic made by his girlfriend Alison and thought, not for the first time, that life is wonderful.