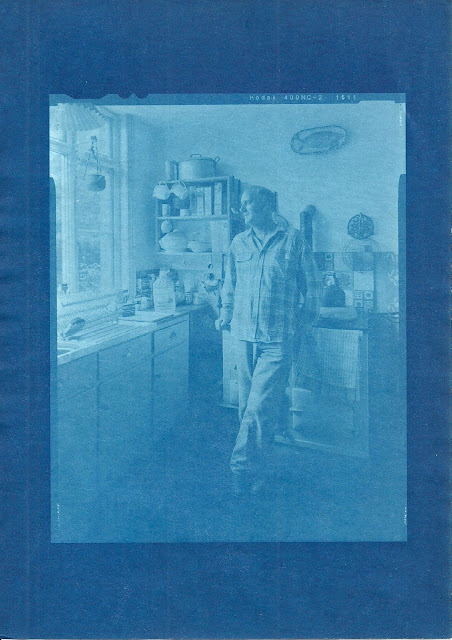 Yesterday, I received the following letter :-

I moved a little over two months ago and while packing boxes came across this print from the session with you in Milford. I'm afraid it has taken me rather longer than intended to get it in the post to you.

It happens to be a cyanotype contact print from the original 5x4'' negative. A one-off. I was given the paper around the time I was working on the project where I photographed you, and I was just playing around. Cyanotypes are usually only good for photograms (Think Anna Atkins.) I think this was a few hour's exposure on the small light box I had at the time, and was developed and fixed in plain water.

I'd forgotten about the various shots we took, and I think the kitchen was a great venue. While I was setting up the camera I recall your wife describing your tremors as you posed ......... But I may have all of that wrong. Anyway, the blue print on light paper is quite compelling, I think. It has a vague quality , not unlike my memory.

I hope you enjoy it, and add it as a footnote to your collection. I remain privileged to have been a part of it all.

Mark Russell photographed me in May 2007 and he was the second photographer to do so. He had advertised in Time Out for people to take part in a project where he was photographing people in their homes and, as with the first photograph by Graeme Montgomery, I had no idea that I was in the first stages of my project, "Over the Hill".


It is difficult to express my feelings about this letter. It is so beautifully composed but from my brief contact with Mark at the time and since, he has revealed himself to be a warm and sensitive human being with a great deal of love in his heart. I showed this to my wife and she was equally touched and said that we must frame the print and put it up with all the other special pictures we have dotted around the house. For it is special. This last nine years of Over the Hill has been so momentous for me. I have met so may lovely people; people that I would never normally have met in a million years and they have made me very, very happy.


Privilege. It is a gift of something that we feel is enjoyed by only rich people or those in influential positions of power and authority but, in fact, we are all privileged to have the gift of life (however long) and the opportunity to meet and relate to other human beings. When I was a lawyer, I felt privileged to be privy to the knowledge about my clients' personal affairs and to be asked to deal with them. I also feel deeply privileged to have known and worked with Mark and all the other 424 photographers.

WEBSITE: http://www.markrussell.me/at_home/
Posted by Tim Andrews at 00:53 No comments: