Tara was introduced to me by the charming Martina O'Shea and this could have been awkward in that I now only work with photographers whose work interests me and so, what if I didn't like her work?As it happened, there wasn't a problem because, when I looked up her website, I really liked what I saw - considered, clear and honest portraits.

So I wrote to her and she replied confirming that she would be interested in going ahead and, within a very short period of time, I was standing outside her studio/flat in Limehouse where she lives and works. As she warned me, there was no doorbell and so I called her mobile and within seconds, a pretty woman with a very friendly open face framed by dark black hair appeared at the door. We shook hands and I followed her up to this gorgeous flat full of all sorts of interesting artefacts and furniture including mannequins, typewriters, an old steel bath, a Roman helmet, boxes of vinyl LPs, a turntable and a cat. But, although the place was full up with 'stuff', it looked ordered and I guessed that, if Tara wanted a prop for a photograph, she wouldn't have to spend hours looking for it.

She said that she had not looked at many photographs of me because she wanted to come to me without any preconceptions. However, she had obviously thought long and hard about our shoot and had made quite detailed notes and sketches in a little notebook in readiness. She had set aside an area for shooting and she rolled down a black backdrop and asked me to sit in a chair and gradually we both relaxed into the shoot as she gave me little instructions every so often as to where to look and, as we continued, we spoke about music and photographers and her young cat who darted about to keep us on our toes. She used two cameras, one connected up to the lights and the other not which produced much darker images.
She asked me to remove my T shirt and then to use my hands to paw at my face and shoulders and we tried some double exposures with some movement. We then got onto the subject of Shibari, an ancient form of artistic Japanese bondage which I had never heard of, let alone practiced and she asked if I would like to try this. By that time, I was cool with whatever she had asked me to do and I thought "why not?'' She tied a short length of rope to my forearm using a series of identical knots and leaving two longer lengths dangling from my wrist and asked me to pull these hard to produce tension in the rope and the muscles of both arms. Tara explained that it wasn't working with my jeans on and so I took them off and squirmed and stretched on the floor as she clicked away. We then removed the rope and finished with a few more shots and that was it. 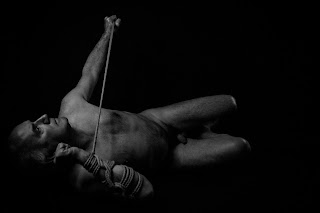 She then cooked a lovely bowl of stir fried rice and Martina joined us bringing biscuits which we ate with a cup of tea. It was lovely to see Martina again and catch up with her. It is meeting people that has been such fun in this project. The photographs are great, of course, and there is much to admire in them artistically, but it is the manner in which the photographers have each been able to say something about the relationship which developed between us during the shoot which I find fascinating. Tara had played music by Oscar Peterson and Nick Drake from her vinyl collection and, as we chomped on our biscuits, the Kinks blurted out "Yes, yes, yes, yes, yes, yes, yes, yes!" which somehow seemed very appropriate. I hugged Martina goodbye and Tara showed me to the street where we hugged and talked about working some more together. I skipped off to Westferry DLR with a spring in my step and a song in my heart. I had had a great time with Tara.

As for the photographs, Tara sent me them quite quickly having chosen those which she preferred. There was so much variation but in the end I chose one which I felt was the most honest and truthful pose. The light is perfect, subdued and gentle. The Shibari shots were interesting and it is the light in the one shown above which dominates and highlights the almost balletic shape of my body; my face has a peaceful calmness about which contrasts with the tension in my arms and chest. Light, shapes, movement, emotion, connection and intimacy combine to produce a wonderful document of the meeting of two people of different generations and backgrounds brought together by a deep love of photography and a fascination with people.