THE TIN MAN by Sean Hawkey

Brighton 12th September 2015. A 5th Birthday Party. A surprise birthday party for me because I had forgotten that it was on. Oh, yeah, it was in my diary but obliterating the scrawl which read "Min cluck porty" was another entry saying "9am 1pm SEAN". So, when I walked up the steps of the Unitarian Church to meet Sean Hawkey for my shoot with him, I was pleased but slightly bemused to be welcomed by Jim Stephenson of MiniClick who told me that it was their 5th Birthday Party.


On the screen at the back of the dais inside the church were the names of sixteen photographers who were going to give talks that afternoon eight of whom had photographed me and one of whom might, just might still do so. Kevin Meredith walked past and gave me a strong, warm handshake. Kristina Sälgvik provided a friendly hug and I kissed Lou Miller hello and she asked if I would like a badge made from a Laura Pannack print. I found Sean Hawkey, whom I had never met before, in the back room. He had just finished taking a picture of the great Antonio Olmos who turned, beamed and said "Hi Tim!" as he pumped my hand. I introduced myself to Sean and he explained what he was going to do and I was allowed to queue jump much to the seeming chagrin of a woman who I think was next on the list. Nevertheless, I redeemed myself by letting a guy go ahead of me as he had to cycle to Preston to make an appointment - not sure the woman was impressed by this act of generosity. Oh, well you can't win them all. 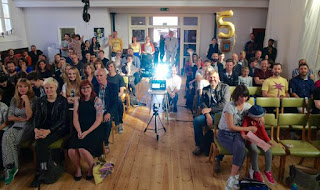 I listened to some great talks by Alex Bamford, Niall McDiarmid and Antonio. I am afraid that I ducked out of Murray Ballard's talk to get back to Sean and his amazing camera.  Ally Lethbridge, Abbie Trayler Smith and Annie Collinge and Jocelyn Allen were next up. Annie introduced herself to me beforehand and was quite nervous but spoke very eloquently. Ditto Abbie who had been allowed out to play by Harry and their son, Florian. The witty Peter Dench gave a typically amusing account of "Dench in Dallas" and he was followed by Stuart Griffiths and Ewen Spencer. Kevin Meredith then spoke very movingly of his daughter who is also five years old and already taking photographs, some of which were flashed up on the screen. He also paid a deserving tribute to MiniClick. In the meantime, the first shot by Sean was not quite to his liking and by the time he took his second photograph, I had an audience which made me a bit nervous myself but it was fascinating to see Sean create a picture of me on the tinplate. And what a superb photo it is. It is all in the eyes and I really like the fact that I am leaning slightly as it gives the image a movement that perhaps such photographs might not otherwise have.

Sean's description of the photograph is below:-


"It’s an 8x10” tintype shot with the wetplate collodion method. I used the chemical formula invented by Frederick Scott Archer in 1851, and a Dallmeyer 3B lens made in London in 1872. Early Petzval-type lenses like this have more aberrations than modern lenses, that's why I love them, imperfections make pictures - like people - more interesting.

The chemistry has an ISO of just one, so the exposure has to be quite long. Even with a massive amount of light from a mercury vapour lamp very close to Tim, he had to sit completely still for an exposure of 6 seconds.

The image is a reversed positive, so it’s not how we see Tim in real life, it’s what Tim sees in the mirror. And the because the wetplate chemistry is mainly sensitive to invisible light, Ultraviolet, and the blue and violet part of the visible light spectrum,  it’s not a record of what we see with our eyes. There’s no app to reproduce that." 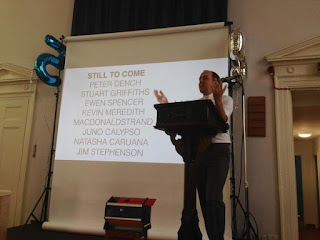 I asked Billy Mather to draw the photograph by Solarixx so that I could send it to her in her hour of need. I pondered the possibility of nicking some birthday cake whilst saying hello to Ally who was sitting next to Melissa Campbell and Blake Lewis. I had to leave before the final four speakers but not before greeting the lovely Jack Latham. On the way out, I bumped into Alma Haser and Nick Ballon, talked westerns briefly with Melissa and Blake and Martin Seeds, walked back up the steps to chat to Jo Renshaw and then I was gone.

So, a lovely day full of lovely people and  ended up with this amazing picture by Sean. What more could one ask for on Saturday 12th September 2015?