SLIPPING IN THE UNKNOWN by Kathy Foote

EVAN HAS A SISTER

There is no photograph to accompany this post but it has everything to do with my photographic project. In the the eight years I have been photographed I have met many wonderful people, hugely talented artists each one, but what I have loved most are the friendships I have forged with people that, in the normal course of events, I would never have met.


One such person is Natalie Dybisz who some of you may be aware lost Evan, the son born to her and Matthew. Well, Evan now has a sister and she is Lilith and I am so happy for the family that has borne such sadness and such joy. They have learned things about our existence in this world that many people will never learn - it is all so magical.


Natalie, Matthew, Evan and Lilith - I send my fondest love to you all and my grateful thanks for having been guided towards you by Natalie's wonderful, beautiful and magical artistry and love.
Posted by Tim Andrews at 14:27 No comments:

SAFETY WITHIN THE SHADOWS by Lucz Fowler

I came across Lucz Fowler's work on Flickr - I would find someone whose work I liked but if they lived abroad, I might then go through their favourites on Flickr in the hope of finding someone in the UK whose work would be similar. My guess is that is what happened here. When I found Lucz's work, I was attracted not only by her wonderfully dark and emotive images but also by her writing which told of her passion for photography and her use of the medium to express her deep feelings about life and love and nature. She wasn't afraid to dig deep even if it hurt. So, I wrote to her and in her initial reply, she expressed her interest in my project and in photographing me. She asked me a lot of questions and, after she had seen the pictures on my blog and realised that I had worked with people she really admired e.g. Natalie Dybisz (aka Miss Aniela) she became even more enthusiastic.


She began to formulate ideas in her mind and sent some preliminary thoughts to me and we talked about arranging the shoot in Brighton but, as my son was unwell and staying with us, I felt it would be better to travel to her home in Cardiff and, in any event, she was more familiar with the locations there. In advance, she asked me to buy a pair of women's nude coloured knickers. I went to Marks & Spencer and told an assistant in the Lingerie Department what I needed - she didn't turn a hair. She asked what size I was but I said that I had no idea and when she showed me two different sizes, I went for the larger version and quickly departed the store with this unusual addition to my wardrobe. I confirmed to Lucz that I had bought the pants and that they looked rather fetching - she replied saying that mine was the best email she had received all day.


So, a date was arranged and I travelled there by train and I stepped out of the station to meet her. Her welcome was warm but slightly guarded I felt either because we had only just met but also because she works primarily in self-portraiture and I think was wary about having another person involved in the shoot. However, any concerns in this respect quickly disappeared as we began to chat on our journey in her car back to her house. Lucz is not afraid to voice her opinions and these were quite forthright but she listens intently and so the conversation flowed easily between us. We arrived at her house, an attractive semi-detached property on a pleasant estate, and she invited me in to a comfortable and clean home. We had a cup of tea and discussed what we were going to do. The first shot would be outside in her back garden behind a sheet sprayed with water and with images relating to Parkinson's pinned to the fence. Then we would be going on to some woods for the main shot with some wonderful black wings she had made and which were spread out on the ground in her garden.


All the time, she chatted away and continued to surprise me with her openness and honesty. Lucz just does not hold back in expressing her views and, even now, whenever I receive emails, I hear that lovely Welsh lilt in the words she writes. We then drove up to the woods but the sun was shining brightly which no photographer likes. Nevertheless, we pressed on with the wings' shot although I expressed my concern over the possible breach of local bye-laws when she set fire to the wings. We tried some other shots including these two and then we returned to civilisation and collected her charming daughter, Tinisha, and Lucz very generously bought us lunch at a local cafe. We returned to her house where we dropped Tinisha off and I was introduced briefly to her partner, Conor, and then Lucy took me back to Cardiff Station and I caught the train back to Brighton and, on the way, I reflected on my day and how, in making contact with all these photographers, it has introduced me to people from different walks of life in the same way my legal work had done and I began to understand that it was this aspect of my job as a solicitor that I liked particularly. I was not the greatest academic lawyer by any means and the work was stressful but it was the contact with people above all that helped me cope. 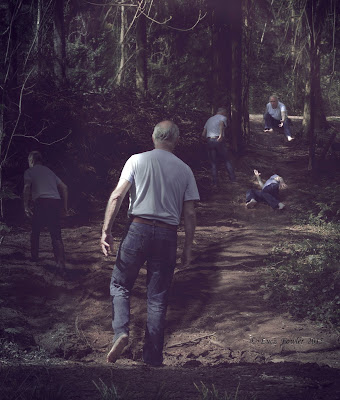 Lucz is extremely busy working for her degree and so it took a while for these images to appear and she explained that the one with the demonic wings did not work because the light was wrong as she had feared but I love these images. The manipulated picture showing my struggle up the slope using my positivism to beat my despair and help me carry on in the face of adversity is very interesting. but it is the more simple image of me in the shadows that for me sums up Lucz's approach to her work. Although many of her images are complex and full of incident and emotion and passion, it is often the central idea expressed in them that elevates her work to a level comparable with that of the artists she admires so much. We are talking of doing more together -  I can't wait.