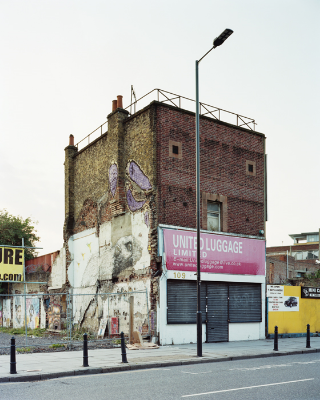 I was born in 1951, only 6 years after the end of the Second World War, and I remember a number of shopping trips and other visits to central London with my mother from my home in Finchley when, from the top of the bus, I would see bombed out buildings awaiting demolition. Therefore, I found it really interesting to hear from Thom Atkinson who came to photograph me in 2009. He has told me about a self-publishing project he and his sister, Beth, have been working on. There are some pictures and information here at their imprint website - www.hwaetbooks.com

The project they are publishing is entitled Missing Buildings and, in a nutshell, it is about the physical and mythological legacy of the London Blitz.

It is an amazing book full of wonderful, haunting pictures of these buildings. I found myself looking at the weird outlines of the missing buildings against the ones which had survived and wondering who had been living there, were they killed, what pictures had been fixed to the exposed interior of the party wall? There is so much to see and ponder on even though it is just an empty space. And now, 70 years after the end of the War, there is still a presence there.

You can pre-order one of a limited edition of 100 copies of the book individually numbered and signed by Thom and Beth Atkinson which will include a numbered and signed 10x8 print of your choice and your name will be printed in both the Limited and the forthcoming Trade Edition. To pre-order your copy, you should contact Hwaet Books direct.

At four o'clock in the afternoon on 12th November 2014, I walked into The Basket Makers pub in Brighton and bought a pint of beer and sat down at a table near the wall. The pub was dark and comfortable, the barmaid's welcome had been pleasant and well meaning and there was a lazy hum of conversation in the air. I took off my coat and took a sip from my glass. The door opened and Alison stepped into the bar and looked over to me and smiled. It was a confident smile of recognition, of delight, of expectation. I knew from that moment that our collaboration would work well. We talked for a long time and, during the conversation, she said that she would like to use Lucien Freud's paintings as a reference for the shoot. I was beginning to be seduced, not by Alison but by her ideas. I wrote a rambling email to her the next day with vague ideas about brush strokes on the body but, as we had discussed at our meeting, these were really just notes and thoughts which would never be likely to end up in the final images but might influence how the shoot would progress. She replied with some examples of early Victorian nude photography and gradually we were creeping towards the unravelling of the feeling of total abandon which I was able to express at the shoot.

We agreed to meet at the gallery where the shoot was to take place and she showed me this enormous space and described how she intended to set up the shot in the middle maybe with a sheet for me to sit and lie on. It was now coming together in our minds and the anticipation was growing. The shoot itself took place on St. Valentine's Day 2015. That morning, I had shown my family the Valentine's Day film I had made and I felt very much connected and in love with them all and so, it was with a song in my heart that I set off for the shoot.

Alison welcomed me with a quiet warmth that spoke of a recognition of a short-lived but trusting friendship. We had a cup of tea and I was introduced to a few of her colleagues as they left to go home and then we made our way into our temporary studio. Everything was ready - Alison had created a bed covered by a crumpled sheet and had had the forethought to place a soft mattress underneath. She showed me some of Freud's paintings and then we got started. After about half an hour, I took a break and we looked at the photographs she had already taken but I knew that we had not yet achieved what we were looking for - or rather, that of which I was capable. I owed her more than this. I returned to the sheets with renewed intent and I went for it. I opened myself up and almost forgot that Alison was there but she was there clicking away as I twisted myself into shapes and spasms of emotion and passion, all the while aware of Freud's own intensity and lush strokes of the pink and brown of flesh and skin.

Alison's recent work had been still life pictures of piles of books and jugs and glasses - domestic, normal household objects which spoke of the people who used them, rubbed their hands on them and picked them up and put them down. I had thought that photographing me was a departure but it was more an extension, a viewing of the body as yet another object which can inhabit a home space like any other. A rude, ruddy shape of bone and muscle.

This photograph was taken in this second session and speaks of the communion of artist and subject, each with total faith in the other's ability to capture the beautiful baseness of humanity and hold it aloft and let it crumble and fall where it will, to be sucked into the earth, to feed and nourish, to regrow, to live and die. I love this photograph.

WEBSITE: http://www.alisonbettlesphotography.com/
Posted by Tim Andrews at 02:57 No comments:

FACE UP by Auriane Defert

WE ARE SOME WILD CHILDREN: http://www.wearesomewildchildren.co.uk/
Posted by Tim Andrews at 00:17 No comments:

You know that friend that you had at school? The one who was always there but you never had any awkwardness with? He was just there. And when it was time to go home, you didn't ask him to join you but you always walked home together, bumping shoulders and maybe sharing the odd licorice pipe or two? No? Oh well, you lost out there then. Anyway, well that is what walking round Brighton with Hannah taking photographs was like. Except she has prettier eyes than my schoolfriend. My guess is that my schoolfriend was the better footballer though. He had a mean right foot shot and could dribble for England. But then I have never seen Hannah play football so how can I judge? 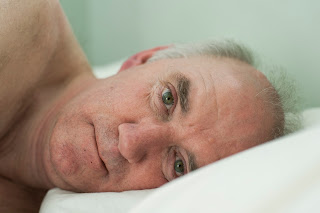 When she began to follow me on Twitter, I looked up her work and liked what I saw. Very much. It was full of life, of interest and of passion. We met and guess what? She was lively, interested and passionate about her art. We talked at length and agreed to proceed with the shoot on 4th February 2015. She came round to my house and chained her bike to our railings and we set off on a little jaunt to the beach. We ambled along the front and talked a great deal. We ended up eating Knickerbocker Glorys in a Diner facing the sea. Then we returned to try some shots in the bedroom and the bathroom. As we finished in the bathroom, she asked me if there was anything else I wanted to do. A voice in my head yelled out "Yes! The same again - with knobs on!!" but they stayed in my head and I only told her afterwards. Words. Only words. 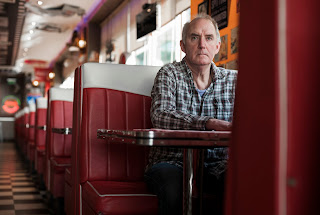 Some while later, as agreed, we sifted through the shots together and agreed a shortlist to choose from. However, there were some she had taken on film which were to be thrown into the mix and, when I saw those, I knew immediately that this was the one. I love the washed out tone, the engaging look into the lens. The smugness. Simple and effective. Just before she sent this last batch to me, she apologised for the time it had taken her but no apology was needed. Why apologise when sending me such great images and having spent so much time on taking the photographs in the first place? Because that is her way. She wants to do her best for everyone but sometimes there are not enough hours in the day but then she finds space and works hard on what she has done and this is the result. My photograph by Hannah Lucy Jones. Her belief. My faith. Words, only words.

WEBSITE: http://www.hannahlucyjones.com/
Posted by Tim Andrews at 09:58 No comments: