I love films. My mother used to take us to the Hendon Classic or Temple Fortune Odeon or The Ionic in Golders Green  to see wonderful films like David Lean's "Oliver Twist", "The Man who loved Redheads" (starring David Niven), Walt Disney's "Old Yeller" and "The King and I" (her favourite) even though we did not have two farthings to rub together. We often used to arrive late and, in those days, you could stay in the cinema and watch as many showings as you liked, so we would stay and see the bit we missed but it was a little confusing to a six year old boy to see [SPOILER ALERT] Old Yeller get shot dead at the end and then miraculously recover to star in the next showing. Six-year-olds are so much more aware these days.


So, when Phil suggested a short filmed moving portrait, I said "yeah, ok, if you want". No, I was thrilled and you would understand why if you saw his website which contains some wonderful work. I came across Phil when he started following me on Twitter so - good old Twitter. We chatted to and fro by email and then he called me and said that he had found a location in Broadstairs and we arranged a date of 27th November 2014 and I booked my train tickets to Margate where I was to be collected. He asked me to bring a white vest and white pants.


I enjoyed the journey from Brighton to Ashford International and then on to Margate. The countryside was bare but Kent looked rich and fertile under the grey sky. It was fairly mild but I wasn't bothered what it was like really as I was nice and snug in my train - what a way to travel. I cannot remember if Phil or one of his colleagues collected me from the station but the journey to Broadstairs was quite short and I was fascinated to see where we were shooting. It was a very old house in a short terrace off one of the main roads leading to the beach, full of atmosphere and memory. Apart from a short break for sandwiches, we worked all through until it was time for me to leave and catch the return train from Margate. We filmed in most of the rooms - Phil had a pretty good idea what he wanted from each shot and was clear in his direction. H e had set up everything the day before. He is a very nice man whose manner is gentle and warm but, at the same time, he was firm in his instructions to his crew, Adrian and Rory, who both worked hard and conscientiously throughout the shoot and were very friendly and considerate to me.


This project is magical. I see something I like in someone's work. I ask them to photograph me. Sometimes, as with Phil, they say yes. I meet them, work with them, get to know them and I go home with a glow of friendship in me and then I get a film like this. I cannot pretend to know what it is about; maybe nothing but it has a narrative feel and a lyrical quality and I love the balloons in the background bouncing around like brain cells desperate for some dopamine to put them right, poor sods. It moves slowly, gently, like a wide river; it has depths which you comprehend the more you watch it and, if you are with someone, you turn towards them and you smile. Because you get it.

ONE FROM THE HEART by Nandita Lovage 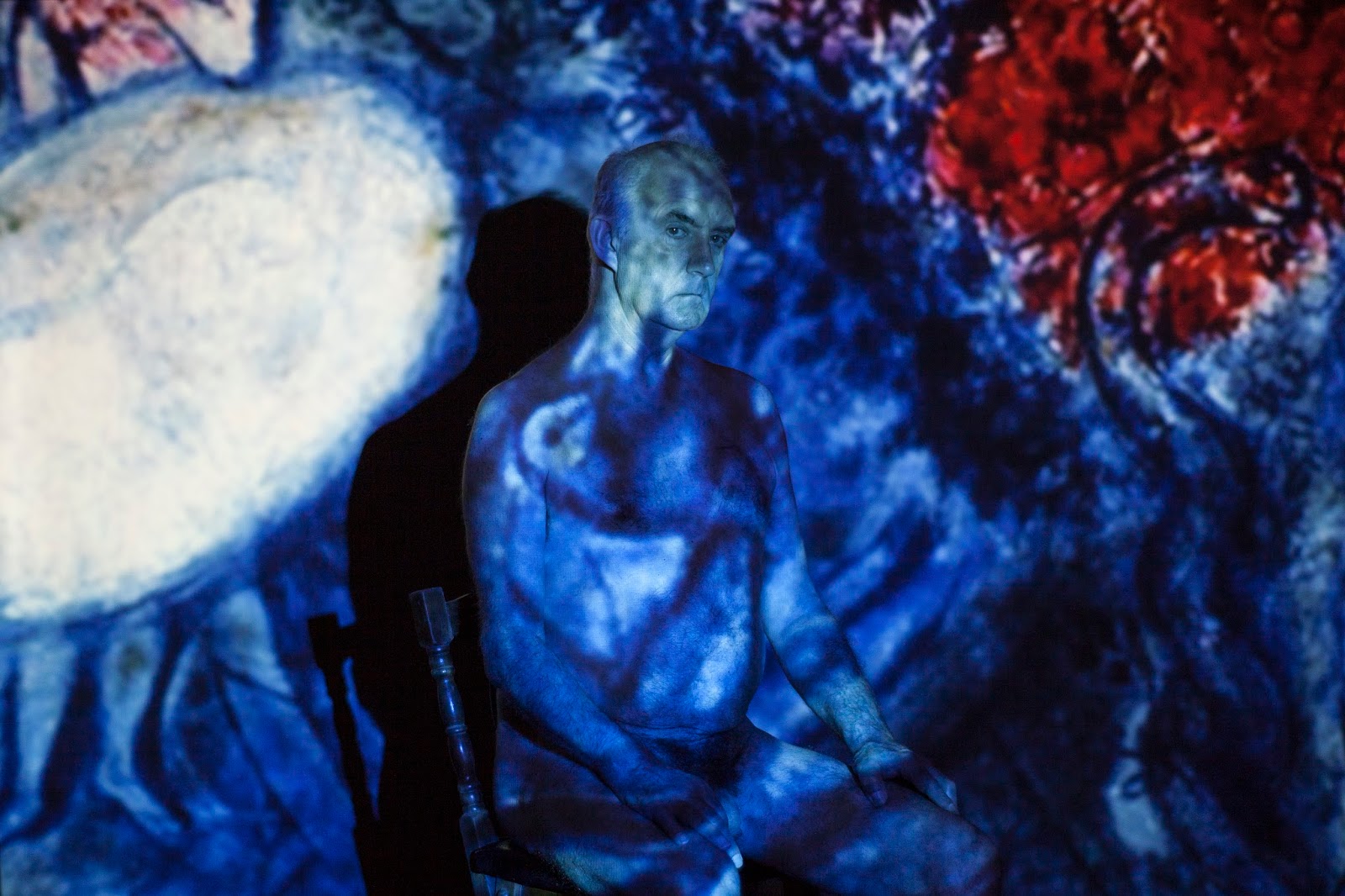 The shoot took place on a Saturday in a small building which Nandita had a personal connection to when she was little and so that meant she was also in a place physically and emotionally that was full of happiness and good memories. We tried various paintings and went from me sitting naked on a stool to standing and then back to the stool again. We looked at some of the images whilst we worked and it was clear that the few figurative pictures used were not as effective as the landscapes and more abstract works. Although I had had some inkling of how the pictures would turn out, I was still very pleasantly surprised by how good they actually were especially this one. I really like my stare into the distance but whereas some stares into the middle distance look just like that - a look into the middle distance - somehow my look has much more meaning in that it appears to be directed at the viewer even though I am not looking straight at the camera. There is wistfulness to it but it is not in any way devoid of strength or challenge. It still engages and throws back a statement of intent and resolve. I shall survive and I shall live my life. I love the shadow behind me - almost as if the old me is there, not hiding but supporting the new version.

Nandita worked very methodically and inclusively in that, as we looked at the images, she was always concerned as what my thoughts were and willing to listen to suggestions. It was a simple idea of hers beautifully constructed and with such great empathy shown towards her subject even though we had known each other only for a relatively short time.  It is a skill that makes the difference between a good photographer and a great one and Nandita is certainly the latter.

WEBSITE: http://nanditalovage.com/
Posted by Tim Andrews at 06:22 No comments: