MAN WITH PARKINSON'S AND MAN DANCING by Alicia Clarke


I came across Alicia's work because the model (and now brilliant photographer) Alex B.,was photographed by her. I looked at Alex's blog because she had posted a very kind comment on my blog at the same saying that she and I had both been photographed by Neil Huxstable. Anyway, I liked Alicia's photographs of Alex and so looked up her website and found some more rich material and so I wrote to her and she responded very enthusiastically.

She had some ideas almost immediately and these were first photographing me dancing and falling onto a mattress which wold be edited out afterwards. Secondly, she had taken some highly lit shots of a male body builder and she wanted to try the same on a normal male body. Thirdly, she had always been fascinated by Muybridge and wanted to try the same with me. And, finally, she wanted me to don a corset and pose like the female model in the iconic photograph by Horst. Well, I was up for all that! I went to London for some meetings and we agreed to meet in Old Street. I was late because of the other meetings but she had been very patient and we had a good chat over a coffee so I was really looking forward to our shoot together. 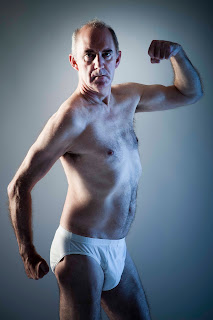 We met at her studio in Greenwich on 13th December 2011 and we got on so well together, taking up where we had left off over the coffee. Alica has a lovely happy smile that immediately engages with you and puts you at your ease. I think we tried the body builder shots first and they worked quite well. The Horst shot was next and, although Alicia had brought one of her corsets along (she used to be a burlesque dancer), it didn't fit but we managed to wrap it round my huge muscular chest with some masking tape. The next up was the Muybridge shot. For some reason we were talking about dancing - I suppose because we had a lot in common; she had been a dancer, as had my mother and I had danced on the Fourth Plinth in 2009 - and, as I posed for the Muybridge shots, I told her that one of my favourite songs to dance to was "Take on Me" by Ah-ha. I told her that I had never danced to it before but had always wanted to but that I was at my niece's birthday party and the DJ put it on (possibly at my request) and I dragged Jane up on to the dance floor and I had the dance of my life. Whilst I was recounting this story to Alicia, the radio was on and suddenly they played "Take on Me" and so I asked Alica if she minded me dancing rather than just standing as she had asked me to do. She said yes and so that is how this photograph ended up being a diptych. 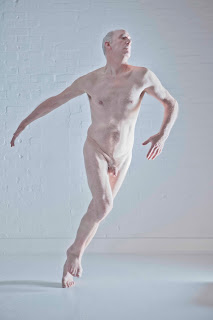 Finally, we did the dancing/falling shots and I really felt in my element here and I loved having a go at getting the right movement as I fell. The whole shoot was such fun that I just wanted to do it all again. I feel the same way now just writing about it!


We finished off chatting and she showed me some of her burlesque performances on You Tube and I showed her some of my highbrow stuff as well. A lovely, lovely afternoon. And then, I get some photographs! How cool is that? She sent some unedited dancing/falling ones first and then the others followed on later. Her favourite was the Muybridge collection. She felt that the two of these together along with their titles, talk about pigeon-holing people and she felt were a true collaboration of where she started the idea (Man with Parkinson's) and where I took it (Man Dancing). Although I was more swayed towards the Dancing/Falling pics, I was very happy to go with her choice. A great shoot, some great photographs and a great photographer - what more could you want? Well, more of the same I suppose!


"My work explores concepts of identity and the body. I believe that any portrait or
image of the body becomes a cultural site where the conflicting concerns of agency,
representation and the viewers consumption interplay.

I’m currently interested in looking at constructions of identity through movement and am
fascinated by the work of the ‘father of motion pictures", Eadweard Muybridge.

For these pictures I collaborated with Tim using his involuntary movement alongside the Muybridge trope as a starting point to examine the idea of the inscription of identity on the photographed body, its methods, problems and possibilities."
- Alicia Clarke 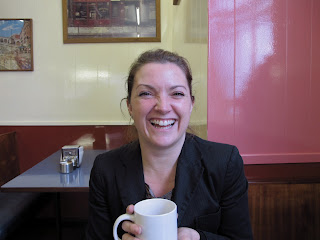 WEBSITE: http://www.aliciaclarke.com
Posted by Tim Andrews at 01:05 No comments:

I HAVE PUT A LINK TO MY BLOG ON THE SAATCHI GALLERY SITE
<a href="http://www.saatchi-gallery.co.uk/">The Saatchi Gallery</a>
Posted by Tim Andrews at 01:16 No comments: