As soon as I heard that David wanted to photograph me whilst I was in Guernsey for the 2011 Photography Festival, I was very excited having already seen his project on Tattoos which was also part of the wonderful work exhibited as part of the Festival. We met on 10th June, a gloriously fresh summer's day and he took me to the beach in his car and asked me to put on my trunks and wade into the gloriously fresh sea. To his credit, he followed and took this great picture - he wanted me particularly to stretch out my arms as if to embrace all the good and big things that are in my life now and ahead. I love body shapes and how the longer you look at photographs of limbs, for example, they take on a different appearance - as if they are not human or rather part of the human at all. I also love the contrasts in this image; the light and shade on the contours of my torso; the certainty of the arms being outstretched in worship to the sun and the confusion in my facial expression; the rounded thickness of my body and the flatness of the water. It is a great, joyous and life affirming image.

David and I chatted all the way to the beach about this and that but mainly about Photography and how he got into it and what he got out of it. We continued to chat during and after the shoot, over a coffee, and then all the way back to my hotel. A very self assured person and a really laid back intelligent guy with a great attitude to a life which clearly he fully embraced and enjoyed. It was no surprise to me to receive such a brilliant photograph a few days later. 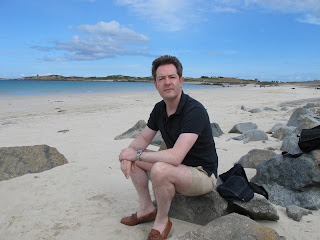