This portrait by Astrid is based on the kind of 1950s film poster that used to advertise John Wayne films. I loved going to the cinema when I was little and I love going now and John Wayne is one of my favourite actors. I just adore "The Searchers" and his performance in "The Shootist" - they are both so different. in the former which is a wonderfully romantic and elegiac movie, he is strong but very emotional and vulnerable and in the latter, he shows a different kind of strength, the strength to face up to his impending death. Then there is the glorious "Rio Bravo" with Dean Martin singing the title song "....and I wonder where I wander.......I walk all alone...." Magic.

Astrid creates work of such colour and richness that I really was excited about  what she would create for me. We met near her flat off Tottenham Court Road and talked about my life and what I had dreamed of becoming when I was a child. I told her that I loved Western films and also that I had collected hundreds of cinema tickets over the years. She is a costume designer as well as a photographer and said she would create a special cowboy hat with the tickets on it. 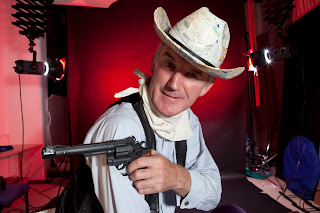 I sent her the tickets in advance and then a few weeks later we met at the studio for the shoot. Using photographs of John Wayne as a guide we tried different expressions and poses. We then retired to her flat for a glass of wine and looked through the photos. Astrid then edited them and the results were tremendous and really captured the style we were after.

I kept the hat.

http://astridschulzphotography.blogspot.com/
Posted by Tim Andrews at 20:02