I saw Joanna's work at her degree show in the Truman Brewery Building in Brick Lane. It was a self portrait which captured movement and isolation both of which resonated with me for many reasons. Obviously, I have problems with movement in that I am stiff and slow in movement and lose my balance on occasion but there is also the tremor. Isolation? Well, before the project started I found myself feeling lonely when I was out watching cricket or in the cinema but the project changed all that. One might consider that people with disabilities are somewhat isolated or rather, separated from the general community but then that can also be said of their partners who are stuck with someone who has a debilitating illness which can be a huge burden in some ways.

I met Joanna for a chat and she told me that, when she was working at a restaurant in London Bridge, she had asked a young woman if she would like to be photographed. The woman explained that, due to work commitments, she would have to decline but she pointed out that her father was in the middle of a photographic project and she gave Joanna an email address which she lost and so she had no way of communicating. You may have guessed already that the young woman was my daughter. So Joanna found me in the end.


This photograph was taken in the second of two sessions and the position of the body is what is called a "cat stretch" in Pilates which I have found to be so beneficial. Joanna had found a machine room behind where she worked in Kensington and had persuaded the security guard (a Rangers supporter) to allow us to have access at the weekend. We tried different poses and then came back a second time to fine tune some of the shots including this one. Joanna is very self deprecating but she has huge talent and determination and takes terrific photographs. It delights me to say that we will work together again.
Postscript 2018: Joanna has just sent me the photograph below from our shoot in 2011. It says so much about me at the time. Deeply connected and obsessed with my project, youthful, full of optimism, in the zone. It is also a great photograph. 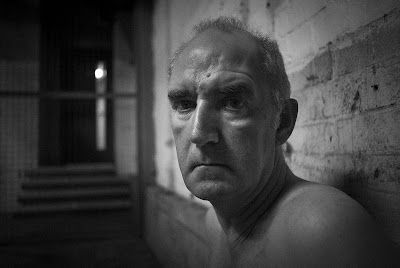 www.joannaburejza.com
Posted by Tim Andrews at 14:05