I saw Sukey's portrait of Bill Bailey in the National Portrait Gallery. It was in a line of photographic portraits by contemporary photographers and I was walking past the line on my way to another exhibition but her photograph caught my eye and I screeched to a halt. What struck me was that she seemed to have totally engaged with Bill and introduced into the picture elements of his character which, as someone who does not know him but admires his work, I had no idea existed. I stood there for some time looking round the edges and then into his eyes and then standing back to take in the whole.


So, I decided to write to Sukey to ask her if she would be part of my photographic project which over a period of three years has involved asking various photographers to photograph me. I have Parkinson’s Disease and I no longer work but the point of the project is not to document my illness as such but rather to document me at a time when I happen to be ill.

I was not prepared for what happened next. Sukey readily agreed to take part in the project but grilled me over some weeks about where I saw myself being photographed and what I wanted to represent. Initially, I saw myself in a derelict space lying on an uncomfortable surface. Also, I wanted to avoid being photographed at home because I live with Jane, an artist who works from home and needs her space but eventually, I realised that there was no alternative. It had to be at home to ensure privacy and that I would be occupying my space and not anyone else’s.

The shoot did not go the way I was expecting. I had built a bonfire in the wilderness area of our back garden and I saw myself either lying or standing on it or in it, wrapped in a black sheet. However, we ended up building a set made up of branches and leaves and bits of old wood retrieved from the bonfire and me adopting a rather self important King Canute-like pose, similar to a character in Jane’s painting “Secrets Travel Fast”. We did use the black sheet at first and I suggested a black top hat which belonged to my grandfather. Then we used a blue blanket and, as the shoot progressed, I felt more and more relaxed so that it was a disappointment when Sukey finally called a halt.

By then I was naked under the blue blanket with the hat at my feet……. 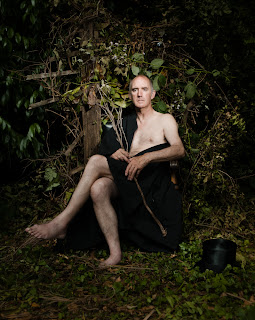 The picture of Sukey’s that I have chosen from the shoot for my project shows me with a serious expression but with an open face which l believe is closer to who l am. The blue blanket is slowly slipping off revealing more of my nakedness underneath. Although l have no problems being naked, l did not want to reveal my whole body at that point but if we had carried on for another 15 minutes or so, l would have revealed a leg perhaps. The picture captures the feeling of slowly opening up to Sukey and to the world and that sort of sums up the feelings behind the whole project - the uncovering of my true self and having the courage to do so. In addition to those feelings which, although are personal and invest the photograph with a certain emotion, the whole photograph is excellent - the lighting, the background, the sense of place, the composition, the colour, the strength, the sheer intelligence and yes, curiosity. Scintillating work.

l feel so proud to have worked with Sukey and honoured to have a photograph taken by her. lt was a happy, happy day when l saw the photograph of Bill Bailey in the National Portrait Gallery.


http://www.sukeyparnell.com
Posted by Tim Andrews at 00:09