I  came across Milly's work through the Brighton Photofringe in 2010 -  I didn't see her exhibition or, indeed, any exhibitions in the fringe but  I got the programme of events and looked up her work, liked it and wrote to her and received a positive reply. We met by chance near the Angel when I was attending a Private View of some other work by Joanna Burejza. Joanna followed me out when I had to leave and we laughed when we saw a red carpet and I joked that it was for me. Then this woman comes up and says "Are you Tim Andrews?" It was Milly but it made us laugh because it seemed that I had a fan club all of a sudden. We met properly a short while later and had a long chat over lunch and, amongst many other things, I told her that I had been brought up my mother, a single parent, with three sisters and a brother and so I had a strong feminine side.

Milly subsequently came up with two ideas for the shoot. One was on the theme of disappearance, as a slow process we all go through with ageing making us less visible to the world. Most of us fight against this and against death. She wanted to treat it with movement and exposure and for me to express myself by jumping and dancing naked. The second idea was to do with our cultural construct of genders. She wanted me to pose with her mannequin,  Juliette (she turns up again), and play with some wigs and other accessories.

Well, we did all this and Suzanne Plunkett was there for a short while to record some of it. It was difficult at first to get into it as I was still reeling from having to deal with making a revised offer for a house in Brighton but gradually, I relaxed and Milly took pictures both digitally and on film. I didn't feel that the shots with Juliette worked as well as the others at first but, as usual, they all began to grow on me and with Jane's critical eye, we ended up with a shortlist of three out of which this was my favourite but it was close. The contrast of the black against the pink skin and the beautiful green of the eyes is dazzling. It says that I am feminine and proud of it and that I don't feel or look daft but I do feel and look different. 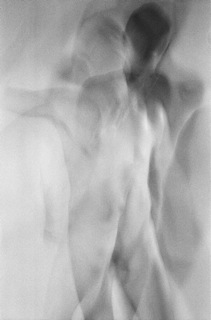 They are wonderfully inventive and, amazingly, to me anyhow, they haven't been retouched at all. The second image is on film and was a very, very close second choice. Milly, you are a star.