WHO ARE WE? by James Reynard


I came across James through one of his sites on the internet and I thought that his work was brilliantly lit and that it may be worthwhile contacting him about the project. I am so glad I did.

We met in the Market Coffee House in where he introduced me to his friend and fellow photographer, Lindsay Wakelin, and they were both extremely enthusiastic about taking part in the project. We arranged subsequently for me to come to James' house at Wivenhoe where he had set up a home studio for both him and Lindsay to take some photographs.  One of James' main influences is Mervyn Peake who suffered from Parkinson's Disease and he had three ideas for the shoot the first being a simple portrait of me in a chair wearing black but with moody lighting and my head still but with a long exposure capturing the tremor in my hand. The second  was another full length portrait based on Peake's character, Steerpike in Gormenghast, sitting in a clock. James explained that "The character of Steerpike is close to my heart, despite (or maybe because of) his Machiavellian tendencies. He uses his wiles to control events around him and rises far above his 'station', yet he is finally undone by that which is inside of him - passion for a woman. Also, Steerpike acted different roles for different people, which is in one sense what you are doing with this project." 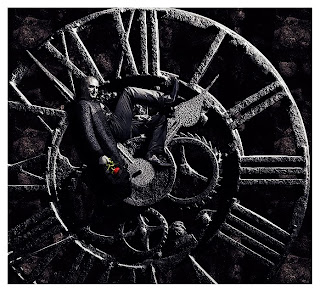 Finally, the third shot would be from outside of me standing behind a window but the window would carry reflections of the outside world which would merge with my naked torso. He did exactly what he planned and the results were tremendous. The Steerpike shot was excellently done but both Jane and I agreed that this shot just shaded it. Whereas the Gormenghast image had been digitally created on Photoshop, this final shot had not been edited at all which I think makes it all the more impressive not that I have anything against digital manipulation as you can see from some of the other photographs in the collection. 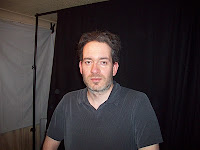 http://adrianmulton.blogspot.com/2010/02/over-hill-three-faces-of-tim.html
Posted by Tim Andrews at 23:30