This photograph was taken by Andrew Firth, a freelance professional photographer with a particular interest in documentary and social photography with a slant towards fine art. His work includes landscape as well as portraiture and his subjects have included Harry Hill, Jon Snow and Joan Bakewell.

The issue of Time Out immediately following those in which Graeme Montgomery and Mark Russell advertised contained a third consecutive advert, this time from Andrew. It contained words to the effect of "Are you a Rollerskating Diva, are you a policeman or a professional footballer? Whatever you are, if you don't mind being photographed, text me" I replied by text saying that I had never rollerskated in my life but that I used to be a lawyer, I did have Parkinson's Disease and I didn't mind being photographed. Andrew telephoned me and said that he found my response so intriguing that he had decided to change his project and now concentrate on photographing people with illnesses. 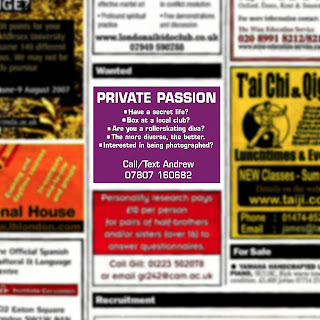 He invited me to his home in Finsbury Park on 24th May 2007 and I spent a few hours with him whilst he first recorded an interview with me and then took some portraits. He used a Hasselblad Film camera and explained that he wanted to focus particularly on my eyes. I found this fascinating in contrast to the two previous photographers the first of whom had used a digital camera and the second a large format camera. When we had finished, Andrew cooked lunch for us both and I met his partner and lovely little daughter. It was such a pleasant experience and I really liked the photograph when I received it from him soon afterwards. I really felt that with this shot, he had achieved exactly what he had set out to do.

However, at that point, I still had no idea how all this would develop and certainly I had no intention of starting any sort of project of my own.