I picked up a Waitrose magazine in my dentist's waiting room in on 22nd May 2009 and I saw Jo's portrait of Emma Dibben and I thought it was really good. So I asked my dentist if I could nick the magazine and he gave me permission in return for me paying him 75 quid to tell me that my teeth were fine. Anyway, enough of that. I came home and looked up her excellent work on her website and then wrote to Jo that day and she replied saying that she would love to be part of the project.


We met a few days later and she said that she did not want to look at the photographs taken thus far but, within a few seconds, her curiosity got the better of her and she asked to look. We had a really nice chat and she said that she would write with the names of other photographers whom she thought were good and would be interested in the project including Linda Brownlee and Thom Atkinson.


But, it was almost ten months later that she came down to Ravenswood and took some photographs including the one below which I love. It shows me looking out of the kitchen window into the lovely, lovely garden. Often Jane and I would stand and lookout into the garden when having heavy thoughts or conversations. That garden has received an emotional mix of gazes from the two of us  - Jane more than me - over the 22 and a bit years that we were there. However, Jo preferred the photograph above and, when she was asked to include her photograph of me in an exhibition, this was the one she had printed - it was taken in our dining room at Ravenswood. My father's wooden motorbike helmet that he wore in the TT races on the Isle of Man is on the desk behind me. The book I created for Jane on our 30th wedding anniversary is on the table together with the pad with the list of the 97 photographers who had, up until then photographed me - as at August 2015, the number has increased to 357. The image is full of story and memory and Jo with superb skill and a natural eye has created a picture that captures that totally. 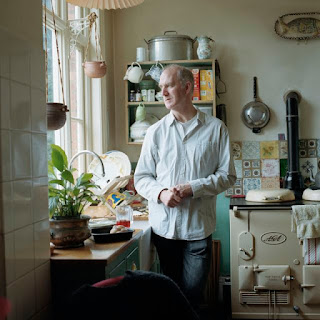