On 15th August 2009, I made my appearance on the Fourth Plinth in Trafalgar Square as part of One and Other devised by Anthony Gormley.

Some months before, I had contacted Linda in reply for her advertisement for nude models to pose as part of a project with which she was involved at that time. She had enough applicants and so did not require me for that project but she was interested in photographing me. She lives quite close by so I went to see her and found a very committed and ambitious person and very easy to get on with. By then, I had been told that I had been successful in the ballot for the Plinth and so we decided between us that, as Linda had a great interest in documentary photography, she would become my official photographer for the day and cover the whole event from start to finish. 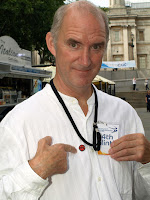 The day arrived and the sun was shining and I had everything ready - the music by Madness, that is eleven of the tracks fromm their album, the speech to make at the beginning, my costume and some of my moves. Unfortunately, the World Free Running Championships were also beng held in Trafalgar Square that day so that meant that the number of people watching me was severely limited and, in the event, some were refused entry and had to stand outside the compound and watching from a distance along with the guys from the Parkinson's Disease Society.

Nevertheless, it all went quite well and it was great seeing so many family and friends watching below.  The high point was seeing Jane unfold a sign saying "MY PERFECT MAN". Not sure about that given all the rubbish she had had to put up with over the last few years.

Afterwards, we all went to the Chandos pub opposite the National Portrait Gallery and got sloshed. A lovely day. And then the aftermath when I received these wonderful photograhs from Linda. What could be better?

http://www.lindacjohnson.co.uk/index.cfm
Posted by Tim Andrews at 01:21