My name is Antonio Banderas known to many as Zorro, Defender of the People, Protector of Freedom. Yes, if you have seen my infantile films on You Tube, you will know exactly who I am. Alistair wanted me  to be caught on camera play acting and this is exactly what he has done and wonderfully well. I  have to say that  I don't dress up in the full kit when I do my broadcasts - as I am in shadow, I only have to wear hat, mask and false moustache.

I saw Alistair's work featured online in Dazed & Confused and then l looked up his website and his portraits looked like fun so I wrote to him and he said yes! We met for a rushed coffee in Old Street but I was already late for a meeting with Natalie so we didn't have much time to chat but I saw enough of him to realise that he is a bundle of positive energy. He just never stops. He is also a great photographer and with this verve of his, he is bound to be successful. Well, he already is.

He wanted to come down to Ravenswood to do the shots and asked to see other photos which had been taken there. I sent a selection and he said he wanted to do something a bit more fun and so, when I told him about Zorro, he jumped at it.

We tried various shots and poses in different locations around the house but he did like this chair in what we called the playroom, which is appropriate. I think he captured the whole daft idea of an amateur artiste at work very well. And it is a great photograph to boot. 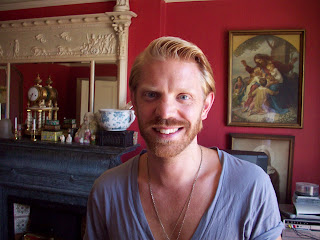 http://alistairguy.com
Posted by Tim Andrews at 23:08