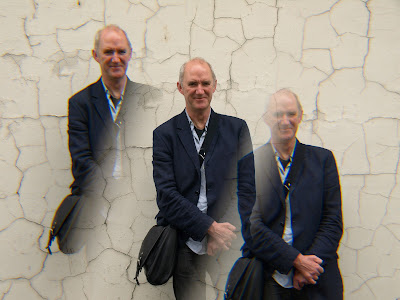 The catchphrase "Hello, Barry Lategan here" became a familiar refrain whenever he called me on the telephone. I am sure that Barry won't mind me saying that he is one of the old school but he is no less talented and successful a photographer as a consequence. He wears a distinctive hat when he wanders out of his full but neat flat in London. His home is like a treasure trove and I was very honoured to be invited to have a look at some of his portfolios which included some classic photographs of Twiggy.

He welcomed me into his flat and immediately told me that he had seen the location for the shooting that day. Eventually, we wandered downstairs but, as we stepped outside the front door, he asked me to climb into a hedge as he suddenly viewed it as an essential backdrop. It didn't quite work and so we carried on to the end of the road and found the wall of cracks which he thought were so intriguing.

At first, I wasn't sure about this shot of me because the others looked so much more intense and therefore perhaps more interesting but then I thought it would be unusual to have a smile in the show. I love this shot - it has really grown on me.

I am also really honoured to say that I have been photographed by the great Barry Lategan.
﻿