Liz was recommended to me by her friend, Jo Metson-Scott, to whom I owe a great debt of thanks because, since first meeting Liz in a small cafe in Stoke Newington, we have had several shoots together exploring new ideas and trying different things out. There has also been one unforgettable experience, more of which later. Anyway, we met at the Parlour cafe on 11th November 2009 and Liz said that she would formulate some ideas and get back to me. She had already explained that she had been photographing informally for the previous 15 years and had worked for the charity, PhotoVoice, where she had facilitated others to take photographs for the past 6 years. 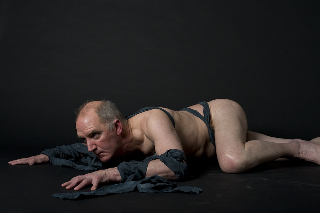 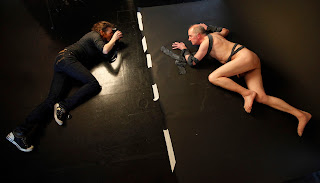 Our first shoot took place in a park in North London near where Liz lives and l found her whole approach so refreshing and inclusive. We took pictures with me wearing a suit and at one point, I improvised a dance. We were aiming to emphasise the incongruity of the landscape and what I was wearing. Liz then came down Milford and we did some more photographs in a similar vein although, this time, some of them were nude shots including my first self portrait. 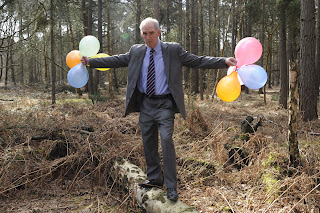 The Box photographs were inspired by my story of how my Parkinson's Disease first started. Although I was diagnosed in 2005, it was in 1999 that I first noticed any symptoms. I was driving back from France and once I got on to the M20, I suddenly felt out of control. I tried braking and then I tried accelerating but nothing seemed to work and so I had an horrendous journey home although I began to relax as I hit the M25 and then felt a lot better on the homestretch of the familiar A3. I saw my doctor and eventually he referred me to a Cognitive Behavioural Therapist who explained that my life was made up of a pile of cardboard boxes each one representing different aspects of my life e.g. my work, my mortgage, my marriage, my kids, my finances etc and, on that day on the M20, the pile had reached the ceiling and there was nowhere else to go. It all seemed very plausible and so I had a course of therapy and gradually began to feel better but what I did not realise then was that I had Parkinson's Disease.

So, Liz and I experimented with the box on two separate  shoots one in her garden, where this was taken, and the other in the studio. I loved this shoot in particular because not only were the shapes of my body so interesting, I was also pushing myself physically which came to a head when at the end of the shoot, I turned 180 degrees inside the box as Liz snapped away.

Liz and I continue to work together exploring different ideas and concepts. She has such a lively mind and is always willing to try something new.