Steve's photography had been an inspiration to my wife, Jane, for many years in her work as an artist. At Christmas 2009, she received a book of photographs as a present and the book included his famous shot of an elephant swimming taken from underneath. I wrote to Steve and he became and continues to be an enthusiastic supporter of the project. I travelled over to Kent to see an old friend of my late mother and called in to see him on my way back. He welcomed me warmly and showed me some of his wonderful work. He is very keen to try new and different methods of working and unusual concepts so the project really appealed to him.


We kept in touch over the next few months and finally there was an opportunity for him to come to Ravenswood. He then outlined his idea which was to paint me in light. He wanted to photograph me naked and run the light of a torch up and down my body and use a long exposure. The photographs, including this final image, were taken mainly in our bedroom.


The resultant image is stunning; it is absolutely unique and so unusual. Steve entered it for the Taylor Wessing Prize in 2010 and it was accepted on to the shortlist of 60 but unfortunately, it did not win but it would have been a worthy winner in a very strong competition. I felt very proud to see it on the walls of the National Portrait Gallery.


Steve has since become an terrific ambassador for "Over the Hill" and he was the obvious person to speak about his feelings for the project at the Private View of the exhibition at the Guardian Gallery in London in 2013 and, indeed, it was due to his influence and championing of the project that the Guardian offered to put on the show in their building in the first place. Steve is the nicest of men and I would like to think that he and his lovely wife, Kathy, have become good friends of both Jane and I

Linda comes from the same stable as Jo Metson Scott and Thom Atkinson in that they all once shared a studio near Regents Canal in London.


I met Linda in The Dove pub in Broadway Market quite close to her studio and showed her the portfolio and she showed me hers. She was extremely pleasant and very keen on the project and so we agreed that we would meet for a shoot at some stage. It was on 5th March 2010, some nine months later, that we met again for the shoot. Not for want of trying but it shows how busy the more successful photographers can be.


We met in North London and she drove to this park in Whipps Cross Road and we wandered around in the crisp early spring weather trying various locations. Then she found a suitable vista and asked to go and stand on the edge of the water. It looked very inviting even on this cold morning and when I went into a preparatory diving position, she called out "Go for it!" I don't think she knows how close she was to getting a different shot.


It is a beautiful photograph, wonderfully composed and the colours are amazing; it is one that receives a lot of favourable comments. Thank you, Linda, the photograph and you were worth waiting for.

http://www.lindabrownlee.com/
Posted by Tim Andrews at 10:00 No comments: 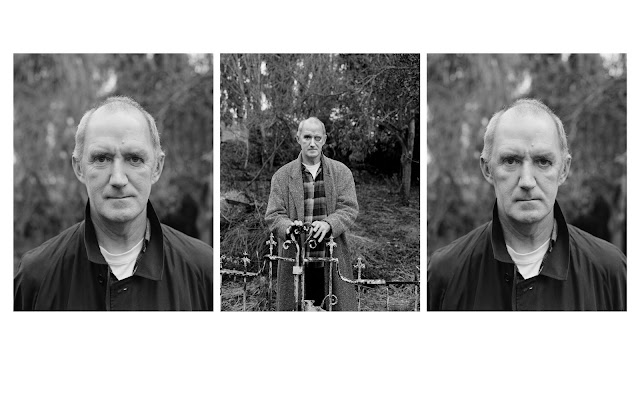 Vanessa is one of my favourite photographers and so I was extremely pleased that she reacted positively to my approach asking if she would like to be part of my project. She pointed out that she had not really made so many images of men (at least not consciously) and, therefore, it could also be space for her to explore.


We arranged to meet initially at, yes you've guessed it, Waterloo Station and then look for somewhere to have lunch. We chose the Turkish restaurant called Tas in The Cut opposite the Young Vic Theatre. On the way, Vanessa asked me if I had mentioned the name of Rankin in my original email in order to entice her to work with me. I admitted that I had done so and she said that it didn't work because she was not an admirer of his work. I pointed out that she had agreed to photograph me anyway!

We had a long lunch and discussed the project and me and my illness amongst other things and we left it that she would arrange to come down to Milford to photograph me there. And so it was that on 12th February 2010 Vanessa came to Ravenswood to photograph me. She used a large format camera and took photographs both inside the house and in the garden. When she photographed me outside she asked me to put a golden coin in my eye so that she could focus the camera on that. I suggested that, for one shot, I left the coin in place.

When Vanessa eventually was able to send me an image she chose "this little threesome" as she put it and said that it was rather nice to include the shot with the coin in my eye as it spoke not only of her methodology but also of her eyesight which seemed to her to make sense in this context. She also pointed out that the other two close images were really quite similar but the subtle shift in my expression in each changed the emotional mood of the whole piece. She ended by saying that she hoped that the project would continue to be a great and interesting adventure. And so it came to pass....

Vanessa is one of the great photographers of all time.