I saw Emma's wonderful work at her degree show at the Truman Brewery building where she and her colleagues at Middlesex University were exhibiting. I had already answered her advert on Gumtree when she stated that she was looking for people in uniformed professions to photograph. I emailed her again and I met a shy, quiet student at Liverpool Street Railway Station where she kindly agreed to photograph me. We decided subsequently to try two different shoots. The first was an idea I had for a blatant publicity shot - me being photographed underwater reading the Guardian newspaper. The other was to be photographed on West Wittering beach near where I used to live. After quite some time looking in vain for an underwater tank to hire, we set up the shoot in a swimming pool in the garden of a friend of mine, having hired an underwater camera. In the meantime, Emma suggested taking some portraits under water and sent some examples of other photographers' work.


Initially, we did some portraits underwater of which this was one. Then we started the Guardian shots but, by then, I was finding it increasingly difficult going down into the water and staying down and I guess it wasn't getting any easier for Emma either. To make matters worse, the battery on the camera ran out and we couldn't charge it up because there was a power cut! 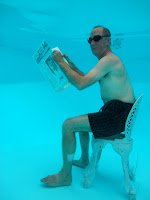 Afterwards, we had lunch together at Ravenswood and looked at the photographs. Emma was doubtful that the Guardian photographs had worked. I was disappointed but she was right. I realised that the shy, quiet student knew her own mind and that her judgement was far more astute than mine. This was image was our eventual choice and I am very pleased with it. It was Emma's idea for me to stretch out my hand and it really does add depth and dynamism to the picture and the whole thing really works well both on its own and also in the context of the other photographs in the project. I do think that Emma produced a great shot in very difficult circumstances. She was clearly a very talented photographer and deserved to succeed. And succeed she did. This main portrait was chosen by the curator of the "Over the Hill" exhibition at the Guardian Gallery in 2013. In the meantime, Emma has become a documentary photographer who is held in great esteem.

We never did make it to the beach.

WEBSITE: http://www.emmadaviesphotography.com.au
Posted by Tim Andrews at 01:11 No comments: