LEAVE ME WHERE I AM by Anon


This photographer advertised on Gumtree for nude models but first of all suggested that he would like to do a portrait of me. I looked at his wonderful work on his website, particularly his landscapes, and I asked him if he could do a landscape but with me in it and he readily agreed. We met at 5am on 17th March 2009 near his flat by the Thames just opposite Canary Wharf. He set up the shot and we waited for the sun to rise and then I quickly undressed and curled up on the ground. There was no-one about apart from the odd early morning jogger and it was peaceful and quiet and very comforting. 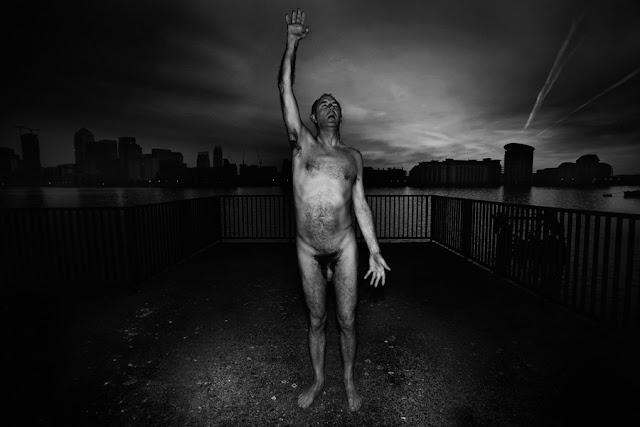 We did some different shots and we were just about to pack up when I asked if I could do another pose based on a photograph I had seen by Richard Avedon. Once that was done, we went back to his flat for a hot cup of tea and something to eat.

It was a lovely shoot and a great feeling being naked in the fresh and crisp early morning under that spectacular sky.

"Once Tim had approached me and explained his condition, I felt more than anything I wanted to show a personal portrait of someone at peace. Taken on a freezing March sunrise at 6am over the Thames, Surrey Quays - the shoot was very quick and simple to bring about these ideas. The resulting 'body landscape' I feel has a calming, warm and honest starkness about it. It's almost as if Tim is dreaming that grand breaking sunrise above and showing us the amazing optimism he carries inside."